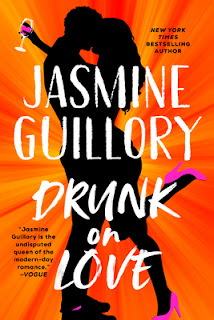 Title:   Drunk on Love
Author:  Jasmine Guillory
Genre:   Romance
Publisher:   Berkley
Format:  Kindle ARC
No. of Pages:  400
Date of Publication:  September 20, 2022
My Rating:  4 Stars
DESCRIPTION:
An intoxicating and sparkling new romance by New York Times bestselling author Jasmine Guillory.
Margot Noble needs some relief from the stress of running the family winery with her brother. Enter Luke: sexy, charming, and best of all in the too-small world of Napa, a stranger. The chemistry between them is undeniable, and Margot is delighted that she lucked into the perfect one-night stand she'll never have to see again. That is, until the winery's newest hire, Luke, walks in the next morning. Margot is determined to keep things purely professional, but when their every interaction reminds her of the attraction still bubbling between them, it proves to be much more challenging than she expects.
Luke Williams had it all, but when he quits his high-salary tech job in Silicon Valley in a blaze of burnout and moves back to Napa to help a friend, he realizes he doesn't want to tell the world--or his mom--why he's now working at a winery. His mom loves bragging about her successful son--how can he admit that the job she's so proud of broke him? Luke has no idea what is next for him, but one thing is certain: he wants more from the incredibly smart and sexy woman he hooked up with--even after he learns she's his new boss. But even if they can find a way to be together that wouldn't be an ethical nightmare, would such a successful woman really want a tech-world dropout?
Set against a lush backdrop of Napa Valley wine country, nothing goes to your head as fast as a taste of love--even if it means changing all your plans.
Link to purchase the book
MY THOUGHTS:
Margot Noble spends the majority of her time at the winery that she runs with her brother. However, one night she literally let her hair down and enjoyed a beautiful one-night stand. Leaving that in her memories, she plans on focuses on the busy winery. She is glad that they will have a couple of new hires as she and her brother are pretty much overworked. Imagine Margot's shock when she discovers that one of those new hires is none other than Luke Williams - her one-night stand.
Business first. In fact, with no plans on crossing any lines Margot is determined to ignore the strong attraction that draws her to Luke. Luke has his own concerns. For one thing he left his high-paying job, in part, because he felt the diversity there was of a token nature, not because of his talent and skills. Luke doesn't know how to tell his mother, as she was always so proud of his education and his job. So, for now, he plans on spending a few months in Napa and enjoying his time working at the winery.
Luke is in the same position as Margot when it comes to the sexual pull that he cannot deny. However, with the career failure that he feels and the temporary nature of his stay in Napa, he doesn't see anything further happening between them.
This heartwarming and often steamy romance by Jasmine Guillory was a delightful read. The characters were wonderful, and their feelings were relatable. I love that they initially found one another and the journey that it took for them to find their way to forever happiness. With a beautiful setting, warm characters and a happy ending, Drunk on Love was a true delight.
Many thanks to Berkley and to NetGalley for this ARC for review. This is my honest opinion.
ABOUT THE AUTHOR:

Jasmine Guillory is the New York Times bestselling author of The Wedding Date, The Proposal, and the forthcoming The Wedding Party. Her work has appeared in Cosmopolitan, Real Simple, Oprah Magazine.com, and Shondaland.com. She lives in Oakland, California.
web | twitter | instagram | facebook