BLOG TOUR - The Most Likely Club 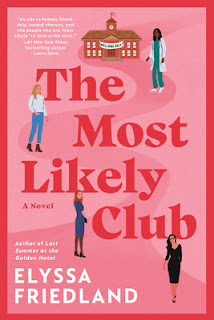 Title:   The Most Likely Club
Author:  Elyssa Friedland
Publisher:  Berkley
Genre:   Women's Fiction
Format:  Kindle ARC
No. of Pages:   368
Date of Publication:   September 6, 2022
My Rating:   4 Stars
DESCRIPTION:
At their milestone high school reunion, a group of friends make a pact to finally achieve their high school superlatives one way or another, in the lively new novel from the acclaimed author of Last Summer at the Golden Hotel.
In 1997, grunge is king, Titanic is a blockbuster (and Blockbuster still exists), and Thursday nights are for Friends. In Bellport, Connecticut, four best friends and high school seniors are ready to light the world on fire. Melissa Levin, Priya Chowdury, Tara Taylor, and Suki Hammer are going places. Their yearbook superlatives confirm it: Most Likely to Win the White House, Cure Cancer, Open a Michelin-Starred Restaurant, and Join the Forbes 400.
Fast forward twenty-five years and nothing has gone according to plan as the women regroup at their dreaded high school reunion. When a forgotten classmate emerges at the reunion with a surprising announcement, the friends dig out the yearbook and rethink their younger selves. Is it too late to make their dreams come true? Fueled by nostalgia and one too many drinks, they form a pact to push through their middle-aged angst to bring their teenage aspirations to fruition, dubbing themselves the "Most Likely Girls."
Through the ensuing highs and lows, they are reminded of the enduring bonds of friendship, the ways our childhood dreams both sustain and surprise us -- and why it's deeply uncool to peak in high school.
Link to purchase the book
MY THOUGHTS:
Back in high school, their friendship of four was quite strong. It is twenty-five years later and time for a class reunion. They consider the superlatives that were written in their high school yearbook. Who would be Most Likely to Win in the White House, Cure Cancer, Open a Michelin-Starred Restaurant and join the Forbes 400? The four friends are Melissa Levin, Priya Chowdury, Tara Taylor and Suki Hammer. How did the four of them do over the past quarter of a century?
Sadly, all of their high school superlatives were not met. The four of them decide to change the course of their lives, and to leave the things that are not bringing them joy. Taking control of their lives and now calling themselves The Most Likely, Club. For starters, we have Melissa, whose marriage to Josh did not last, but she is striving to be the best example to her teenage daughter, all while struggling to decide her future. Priya might be a doctor, but this is not the end all to success in her life, and she often feels unnoticed at work and at home.
Then we have Tara, who while having a successful business and is in a good relationship, is someone who wants more in life, to take her talents and change her life's direction. Lastly, we have Suki, the most successful of them all, fame, business, finance, yet all is not rosy in her life. Powered on by determination and liquid courage, the four friends set goals that each of them plan on working hard to achieve.
This was a wonderful story of friendship, and also a story of finding oneself, and not allowing these characters to stay in the ruts each of them have fallen into. This book was a very good women's fiction novel and the story flowed quite smoothly as each woman regained footing in life. With the '90s being the decade the four friends graduated from high school, there was a wonderful nostalgic feel to this enjoyable read by Elyssa Friedland.
Many thanks to Berkley and to NetGalley for this ARC for review. This is my honest opinion.
Please enjoy my following YouTube video -