BLOG TOUR - When We Were Innocent 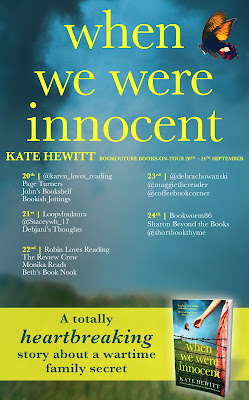 DESCRIPTION:
You love your father with all your heart. But what if he’s not who you think he is? What if he’s kept an unforgiveable secret from you his whole life?Libby Trent believes she knows the difference between right and wrong.But everything changes when she finds out about a man named Hans Brenner, a Nazi who escaped Germany after the Second World War. A war criminal who has lived his whole life in hiding.Because the man suspected of being Hans Brenner is Libby’s own beloved father.The sweetest, gentlest man she knows. Who raised her alone, who lives in her family home. Who cares for and watches over Libby’s own children.When Libby finds a secret box in her father’s bedroom, she knows it might contain evidence. But does she dare open it, if it could prove her father guilty of the most heinous crimes in history?Because if she finds evidence, she won’t just have to choose between right and wrong, she’ll have to choose whether to betray her own father…A totally heartbreaking and powerful story about a daughter’s impossible dilemma and the darkest of family secrets, perfect for fans of Jodi Picoult, Amanda Prowse, and Diane Chamberlain.
BUY LINKS:
Amazon: https://geni.us/B0B786FXF4social

Listen to a sample here:
https://soundcloud.com/bookouture/when-we-were-innocent-by-kate-hewitt-narrated-by-amelia-sciandra
MY THOUGHTS: 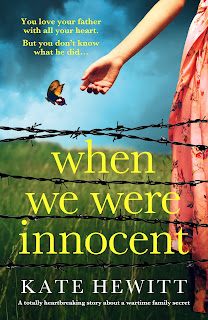 Title:   When We Were Innocent
Author:  Kate Hewitt
Publisher:  Bookouture
Genre:   Historical Fiction
Format:  Kindle ARC
No. of Pages:   409
Date of Publication:   September 20. 2022
My Rating:   5 Stars
Simon Baum from the Department of Justice's Human Rights and Special Prosecutions Section (I do think it was necessary to give all of this information) is certain that Elizabeth Trent's father, Daniel Weiss, is actually Hans Brenner, a Nazi soldier during World War II. Firstly, Elizabeth (Libby) has heard of the Department of Justice, but the Special Department? And they have evidence that her father was a brutal Nazi soldier who worked at the death camp of Sobibor, Poland?
Daniel Weiss is a retired accountant. A gentle man that lives with Libby and her husband and child. Libby could not imagine how he could he possibly be connected to the brutality associated with the second World War, and the death camp housed there in Poland. Not only was Libby sickened and filled with terror at the thought that her father could possibly be the man Simon says that he was, it won't take long for the reader to be filled with similar emotions. In fact, the recounting of that long ago brutality filled me with pain and I had tears of sadness rolling down my face while reading this book.
During much of this book I felt like I was crying with Libby as she desperately tried to prove that her father could not be the man that Simon was looking for. But one thing was made clear - if her father was actually Hans, she felt he should be fully prosecuted for his crimes. Libby was truly an honorable woman, of course she wants all Nazis to pay for their crimes. Therefore, she found herself in an ethical dilemma. Would she help Simon identify her father as Hans Brenner? And would she do what she had to do to have her 96-year-old father prosecuted and imprisoned for his heinous crimes?
The fact that evidence starts to point to the fact that her father hid his crimes for decades, this moral dilemma really plagues Libby. As it stands, she had been living with deep emotional pain for years, as her mother left her in her father when she was a young child. Now with the possibility of losing her father by him going to prison for the rest of his life, it’s almost too much for her to bear. If indeed he is arrested, she knows she will never see him again.
There is another story to be told. The story of Hans Brenner, a young man who wanted to make a name for himself during the War. When Hans got the assignment he was hoping for, he was able to take his younger sister Anni with him as he was her guardian. Anni could tell something was off about the camp where Hans was now assigned. In fact, Sobibor was an extermination camp built and operated by Nazi Germany as part of Operation Reinhard. It was located in the forest near the village of Sobibor in the General Government region of German-occupied Poland.
Would Hans realize the extent of his new duties and would there be anything he could do to not play a role in what would cost thousands their lives? As a reader, I did not want to have sympathy for Hans, not when he was at Sobibor, and not as an old man who was sure to be identified. Libby no doubt realized the revelations that were going to unravel would change her life and the life of her family indefinitely.
Thank you Kate Hewitt for writing such an incredibly impactful novel. This book was highly emotive, devastating all while keeping a tight hold on the smallest thread of hope. As a reader, I felt that I was walking a tight rope of compassion and horror. This is a book that I would highly recommend as I am sure it will make for a lot of deep discussions. In fact, this book is one of my favorite books of 2022 thus far.
Many thanks to Bookouture and to NetGalley for this ARC for review. This is my honest opinion.
Please enjoy my YouTube video review - 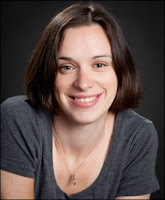 Kate Hewitt is the author of many romance and women’s fiction novels. A former New Yorker and now an American ex-pat, she lives in a small town on the Welsh border with her husband, five children, and their overly affectionate Golden Retriever. Whatever the genre, she enjoys telling stories that tackle real issues and touch people’s lives.
https://www.kate-hewitt.com/
https://www.facebook.com/KateHewittAuthor/
https://twitter.com/author_kate

Sign up to be the first to hear about new releases from Kate Hewitt here: https://www.bookouture.com/kate-hewitt