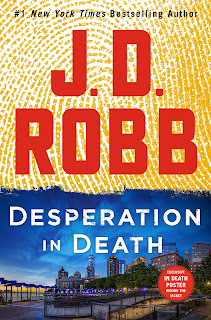 New York, 2061: The place called the Pleasure Academy is a living nightmare where abducted girls are trapped, trained for a life of abject service while their souls are slowly but surely destroyed. Dorian, a thirteen-year-old runaway who’d been imprisoned there, might never have made it out if not for her fellow inmate Mina, who’d hatched the escape plan. Mina was the more daring of the two—but they’d been equally desperate.

Unfortunately, they didn’t get away fast enough. Now Dorian is injured, terrified, and wandering the streets of New York, and Mina lies dead near the waterfront while Lt. Eve Dallas looks over the scene.

Mina’s expensive, elegant clothes and beauty products convince Dallas that she was being groomed, literally and figuratively, for sex trafficking—and that whoever is investing in this high-overhead operation expects windfall profits. Her billionaire husband, Roarke, may be able to help, considering his ties to the city’s ultra-rich. But Roarke is also worried about the effect this case is having on Dallas, as it brings a rage to the surface she can barely control. No matter what, she must keep her head clear--because above all, she is desperate for justice and to take down those who prey on and torment the innocent
.
Link to purchase the book
MY THOUGHTS:
With two girls having been abducted, and one escaping, Sadly, as the girls were escaping, one of them died.  Detective Eve Dallas is in a frantic race against time to find out who abducted the girls. It doesn't take long for Eve to realize that exploitation is behind the abductions and Eve cannot help but remember her tragic past when it comes to said abuse.
Eve is an amazing character that J. D. Robb (Nora Roberts) has blessed her readers with. Multidimensional emotions, including being tough on the outside, but with strong sensitivities when it comes to handling cases such as this. Also, Eve's past comes through from time-to-time, and this is one of the ways that allows her billionaire husband Roarke to shine through, as he helps her through the trauma that was her past.
As this current case hits very close to home for Eve, she works hard at keeping everything in check as she is working. As always, Eve's team is quite instrumental in this investigation. Getting to know Eve, Roarke and her team over the years has been wonderful. With a new team member it will be interesting to see how that character evolves. As painful as Eve's past was, it was pivotal when it came to driving her as she turned over every stone in order to solve this newest case.
This remarkable series grows stronger and stronger with each book. This is the 55th book, and the setting has progressed three years. Eve and Roarke are going strong and, as has been done in the past more than once, he is more than helpful as Eve tries to learn who is abducting these young people and to bring them to justice.
Many thanks to St. Martin's Press and to NetGalley for this ARC for review. This is my honest opinion.
Please enjoy the video review of this fabulous book:
ABOUT THE AUTHOR: