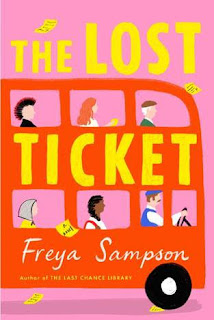 Title:   The Lost Ticket
Author:  Freya Sampson
Publisher:  Berkley
Genre:   Women's Fiction
Format:  Kindle ARC
No. of Pages:   336
Date of Publication:   August 30. 2022
My Rating:   5 Stars
DESCRIPTION:
Libby Nichols arrives in London brokenhearted, unemployed, and with her dreams shattered. The first person she meets is Frank, an elderly gentleman on the number 88 bus, who tells her about another bus ride in 1962 when he met an unforgettable young woman with gorgeous red hair just like Libby’s. They made plans for a date, but Frank lost the bus ticket where the woman wrote down her phone number. He’s been riding the number 88 daily, hoping to find her ever since.

With lots of free time on her hands, Libby decides to take action and help Frank find his mystery woman. With the help of those she meets along the bus route, she hangs fliers about town and takes to social media to track down the Girl on the 88. But with Frank’s dementia progressing at a rapid pace, they must work quickly before it’s too late.

Sampson’s novels tap into the importance of our shared lived experiences – the ordinary, day-to-day outings and interactions that fill our lives with small pleasures and which may seem trivial, but which give our days purpose. The Last Chance Library celebrated the importance of libraries as community centers and safe havens during a time when libraries were closed due to funding cuts and the effects of COVID-19. Now, THE LOST TICKET recognizes the importance of chance encounters and random gestures of kindness that result from public interactions – while riding a bus, for instance – and Sampson again shines light on the world of difference that public spaces and services can make in the lives of their users. Sampson began writing the story in March 2020, just as the UK began enforcing pandemic restrictions and social interactions became more limited.

THE LOST TICKET is perfect for fans of Eleanor Oliphant is Completely Fine and The Authenticity Project.
Link to purchase the book
MY THOUGHTS:
Frank has been riding the number 88 bus for over six decades. While a young man, he made a connection with a lovely woman/ Sje aspired to be an artist and even sketched him while riding on the bus. She mentioned how much she loved art and art museums so the two were to meet up at the local gallery. She wrote her number on a bus ticket, but sadly Frank lost the ticket, thus began his sixty-year search.
One day while riding the number 88 bus, Frank meets Libby. As the two talk they become fast friends. Libby is currently at a crossroads in her life. Her boyfriend of eight years has broken up with her, claiming that he "needs a break". Also, Libby worked for him, and that ended too. So, for the time being, Libby is staying with her sister and her family. When Libby hears Frank's story, she finds it utterly fascinating and decides to do whatever she can to find the woman of his past.
Frank is not the only man that Libby meets. She meets his carer, Dylan, and the two have a connection. However, Libby soon finds that her personal circumstances are far more complicated than she could have imagined, so her desire is to focus on Frank and the missing woman in his life.
What a lovely story by Freya Samspon! Each of our primary protagonists were well developed. The story of finding Frank's lost girl was utterly engaging, and the slow burn of romance between Libby and Dylan was handled quite well. I also enjoyed the drama that was plaguing Libby and how this drama affected her relationship with her family. Very well done! Captivating, impossible to put down, and heartwarming.
Many thanks to Berkley and to NetGalley for this ARC for review. This is my honest opinion.
Please enjoy my YouTube video review -
ABOUT THE AUTHOR: 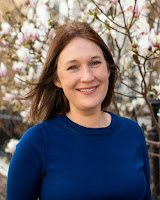 Freya Sampson is the author of two novels, The Last Chance Library and The Lost Ticket/The Girl on the 88 Bus. She worked in TV as an executive producer and her credits include two documentary series for the BBC about the British Royal Family, and a number of factual and entertainment series.
She studied History at Cambridge University and in 2018 was shortlisted for the Exeter Novel Prize.
She lives in London with her husband, two young children and an antisocial cat.
web | twitter