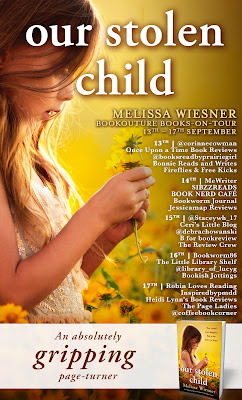 I grip my husband’s hand tight. The doctor is frowning. “Mr and Mrs Marcello… I’m so sorry.” She tells us there’s been a terrible mistake. Our last embryo—our last chance—was accidentally given to someone else. The child we made four years ago calls another woman “Mommy.”
Quinn cries silent tears as she folds a tiny knitted cardigan, bought in a moment of hope, and packs it away. All she’s ever wanted is to be a mother. Although her husband James brings her comfort, the knowledge they have no embryos left, and that their child is out there being raised by another family, is tearing them both apart.
When the lawyers tell them there’s a chance to get custody, James is unsure. But Quinn knows she has to take it: if only to look her little girl in the eyes, just once. Meeting Emily and the woman who raised her, Quinn’s heart cracks wide open. Emily looks just like Quinn, right down to her curly hair. And when the little girl flings her arms around Quinn’s waist, she can’t shake the feeling this is where Emily is meant to be.
As the two families reckon with an unimaginable decision, a secret from James’ past surfaces… one that forces Quinn to question everything she thought she wanted. But how will they decide what’s right for the little girl they all love so dearly? And where does Emily truly belong?
An absolutely unputdownable, heart-wrenching read about two families torn apart by one terrible mistake. Anyone who loves Jodi Picoult’s My Sister’s Keeper, Diane Chamberlain and Catherine Ryan Hyde won’t be able to put this down.
BUY LINK:
Amazon: https://geni.us/B0B7RY6SF2social
You can sign up for all the best Bookouture deals you'll love at: http://ow.ly/Fkiz30lnzdo
MY THOUGHTS: 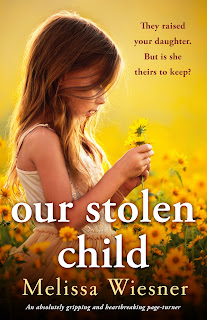 Title:   Our Stolen Child
Author:  Melissa Weisner
Publisher:  Bookouture
Genre:   Women's Fiction
Format:  Kindle ARC
No. of Pages:   289
Date of Publication:   September 13, 2002
My Rating:   5 Stars
Quinn and James Marcello have gone through their finances in their attempts to have a child. They have also stripped their emotions raw. With one last embryo, making this IVF treatment their very last chance, they are truly hopeful that this time they will have a child. However, when they are about to begin the procedure, they get the most shocking news. Their embryo is missing.
While awaiting news of the location of their embryo, they keep their hopes alive. But, their next bit of news is even more shocking. The embryo had been implanted in another woman's womb several years previously, and there is now a nearly four-year-old child being raised by someone else.
This is unbelievably unimaginable to Quinn and James. Their daughter has been here for close to four years and now Quinn will move heaven and earth to involve herself in the child's life. The little girl's name is Emily, and Quinn will not rest until she at least meets her daughter. However, that just is not enough, thus a lawsuit for Emily's custody is set in motion by Quinn, with James simply going along for the ride.
What a different concept for an utterly compelling story. This is not unheard of in real events, as news reports will show. Melissa Wiesner has captured emotions that might truly be felt if such a terrible situation occurred. The ethical question continually raised in this book is whether biology matters. Who has more rights, the gestational parent or the biological parents? Legal rights have to be explored, but hopefully not at the cost of the child's welfare. Also, as Quinn and James has already put their marriage under a considerable amount of stress with IVF treatment after treatment, this impending court case might just be too much weight for their marriage to bear.
It was impossible not to feel for both mothers - for Quinn, but also for Nora, who carried Emily in her womb, and who has been raising Emily these nearly four years. There is also Nora's brother, the father of Emily's little cousin and best friend. The story goes past exploring Quinn and Nora's emotions, but other emotions as well. However, as sad as many moments in this story are, there is a thread of hope carried through, and it is only by reading this book that the reader will find out what happened with Emily, Quinn, Nora and the rest of their families.
Kudos to Melissa Wiesner for writing such an emotionally riveting read. I love it when an author makes the reader feel, especially when it comes to the heartbreak one or both mothers experienced through the pages of this book. I do love how everything turned out and the warm and satisfying conclusion truly touched my heart.
Many thanks to Bookouture and to NetGalley for this ARC for review. This is my honest opinion.
Please enjoy my YouTube video review -

Melissa Wiesner is a night-owl who began writing novels about five years ago when her early-to-bed family retired for the evening. In 2019, she won the Romance Writers of America Golden Heart® Award in the Mainstream Fiction Category for her first novel. Melissa holds two Master’s Degrees in Public Health and Community Agency Counseling. Her day job is in Social Work where she often encounters people knocked down by hard times but who pick themselves up and keep going, just like the characters of her novels. Melissa lives in Pittsburgh, PA with her charming husband and two adorable children.
https://www.melissawiesner.com/
https://www.instagram.com/melissawiesnerauthor/
https://twitter.com/Melissa_Wiesner
Sign up to be the first to hear about new releases from Melissa Wiesner here: https://www.bookouture.com/melissa-wiesner