BLOG TOUR - The Silence Before Dawn 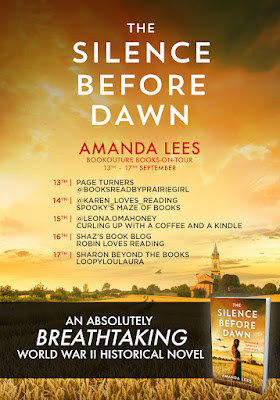 DESCRIPTION:
Nazi-occupied France, 1944: I tear open the envelope, extracting a sheet of folded paper. I read it, my heart cracking with every word. There is no mistaking the name of the man who betrayed us. Jack. My beloved fiancé – and now, a traitor.

For months, Marianne’s resistance network has carried out courageous missions from a remote farmhouse in southern Provence, aiding the Nazis’ downfall. But one fateful night, they are viciously ambushed as German soldiers storm in, scattering, capturing or killing every last person there.Mourning the loss of her friends, Marianne will need every ounce of courage to survive. Not only has her life as a secret agent been critically compromised, but her heart has been shattered. Because Jack, her darling fiancé and fellow spy, fled in the chaos – and is accused of being the traitor who betrayed them.Desperate to believe Jack’s innocence and that their love was true, to her horror Marianne discovers he has been seized by the Butcher of Lyon, a Nazi more brutal and ruthless than any other. Now it is more imperative than ever that Marianne finds Jack – before he reveals the names of every undercover agent in France, or before he is murdered for remaining loyal.So Marianne sets out on the most dangerous mission of her life, and the most personal. With her tight-knit group of fellow women agents by her side, she risks everything to rescue Jack. Can she save her fiancé before it’s too late – and change the fate of the war in the process? Or is she blind to the heart-breaking truth, and simply sacrificing her own life?Based on true stories of the fearless women secret agents – and their tales of bravery, betrayal and love – this is the first book in the heart-pounding, heart-wrenching and totally addictive World War Two Resistance series. Perfect for readers of The Nightingale, All the Light We Cannot See and Ellie Midwood. 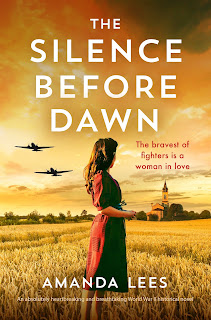 Title:   The Silence Before Dawn
Author:  Amanda Lees
Series:  WW2 Resistance #1
Publisher:   Bookouture
Genre:   Historical Fiction
Format:  Kindle ARC
No. of Pages:   361
Date of Publication:  September 13, 2022
My Rating:   5 Stars
In this thrilling historical fiction by Amanda Lees, Marianne is part of a group of resistance fighters during World War II. It is Nazi occupied France and Marianne is the leader of a network that is working hard to bring the Nazi's down. Despite their hard work, however, there appears to be a traitor among them.
It doesn't matter how many historical novels that I read that I am always learning about another aspect, or area where the war affected so many lives in devastating ways. The fight is on, however, even with a traitor in their midst. Also, with Marianne's boyfriend Jack having been captured, Marianne wonders if indeed he is the traitor.
The resistance is currently focused on Klaus Barbie, who is known as the "Butcher of Lyon", a man feared by many. One of Marianne's team goes undercover to try and thwart Klaus Barbie's efforts. Also, they do hope to not only rescue Jack, but also hope that he is innocent and not the traitor.
What an amazing book and an excellent start to a new series. There were so many countries affected by World War II and the author focuses this story on France, all while telling various stories, that of Marianne, Jack, and their past, as well as the efforts to stop Klaus Barbie and how far one of her team members is willing to go to accomplish their objectives.
This amazing book is one of the best historical fiction books that I have read, especially with learning France’s role in World War II and the resistance efforts as well as the tragedies and the betrayal that needed to be identified. I love that The Silence Before Dawn is the first book in a new series. I am very much looking forward to book two, Paris at First Light, which is set for release at the end of November.
In fact, one of the principal characters in this first book, Juliette, will be the primary protagonist in the second book. Kudos to Amanda Lees for not only writing a thrilling book set in Lyons, France, but also by making it a series that will most definitely be another compelling read.
Many thanks to Bookouture and to NetGalley for this ARC for review. This is my honest opinion. 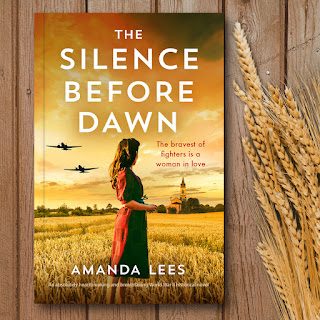 Amanda was born in Hong Kong and survived both a convent boarding school and a Jesuit boys’ school before being summarily ejected from the latter. She gets her thirst for adventure from her parents who met in the jungle in Borneo where her mother had set up a hospital and her father, a former Gurkha Intelligence officer and Oxford-educated spy, was probably up to no good. She is the author of the bestselling satirical novels Selling Out and Secret Admirer (published by Pan) which have both received critical acclaim and have been translated into several languages. Her major YA thriller trilogy, Kumari, Goddess of Gotham, was written as a tribute to her mum, who died a couple of months before Amanda got the idea for a series which would reflect her own exotic childhood. Kumari was nominated for the Guardian Children’s Book Prize and the Doncaster Book Award. It featured as Redhouse Book Of The Month and Lovereading4kids Book Of The Month. A broadcaster as well as an actress and novelist, Amanda appears regularly on BBC radio and LBC and was a contracted writer to the hit series Weekending on Radio 4. She researched and edited the leading directory for banks, The Banker’s Almanac, for Euromoney publications while also covering stories of shady dealings in the City for them. She has written for, or contributed to, The Evening Standard, The Times, New Woman, US Cosmopolitan, Bulgaria's Vagabond and Company Magazine as well as numerous online publications and has two non-fiction books published under a pen name. Amanda has conducted a love coaching phone-in from the sofa of Richard & Judy and wooed the viewers on Channel 5 Live. She won an award at the Hungarian Gyor Film Festival for a short film she produced, a psychological thriller called Pros and Cons. Her book, From Aconite to the Zodiac Killer: The Dictionary of Crime, was published by Robinson/Little Brown in July 2020 to excellent reviews. It was published in the US by Ulysses Press in May 2021. She has just completed the first in a romantic thriller series set at the end of WW2.
Author Social Media LinksWebsite: amandalees.comFacebook:  https://www.facebook.com/AmandaLeesAuthor/Twitter: https://twitter.com/amandaleesBookouture Email Sign Up: https://www.bookouture.com/amanda-lees/