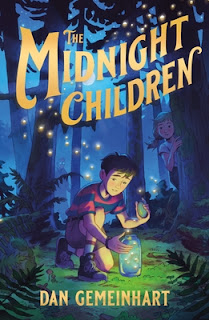 Title:   The Midnight Children
Author:  Dan Gemeinhart
Publisher:  Henry Holt & Co.
Genre:   Childern's Fiction
Format:  Audiobook ARC
Narrator:  Andre Santana
Length:  9 hrs 39 min
No. of Pages:   352
Date of Publication:   August 30. 2022
My Rating:   4 Stars
DESCRIPTION:
An extraordinary story about a family of runaways who take up residence in a small town, and the outcast boy who finds his voice and his people.

In the dead of night, a truck arrives in Slaughterville, a small town curiously named after its windowless slaughterhouse. Seven mysterious kids with suitcases step out of the vehicle and into an abandoned home on a dead-end street, looking over their shoulders to make sure they aren't noticed.

But Ravani Foster covertly witnesses their arrival from his bedroom window. Timid and lonely, Ravani is eager to learn everything he can about his new neighbors: What secrets are they hiding? And most mysterious of all...where are the adults?

Yet amid this shadowy group of children, Ravani finds an unexpected friend in the warm and gutsy Virginia. But with this friendship comes secrets revealed—and danger. When Ravani learns of a threat to his new friends, he must fight to keep them safe, or lose the only person who has ever understood him.

Full of wonder, friendship, and mystery, The Midnight Children explores the meaning of "home," what makes a family, and what it takes to find the courage to believe in yourself.

Link to purchase the book
MY THOUGHTS:
The Midnight Children is an enjoyable middle grade book that delivers friendship, family and adventure. One night Ravani Foster sees a truckload of children emptying. There are seven in all and they are all carrying suitcases. Ravani wants to know more and he soon starts an unlikely friendship with one of them named Virginia.
It doesn't take long for the "evil villain" to begin looking for the seven children. Hopefully they can all outsmart the villain and manage to stay out of his clutches. Now, I had this book as an audiobook ARC and as I was listening to the narrator, I was completely pulled in. In fact, before I realized it, I heard the narrator say "epilogue". Yes, this book was that captivating and enjoyable. Middle Grade is still rather new to me, as is the name Dan Gemeinhart, but I do know that I will be reading more of his books in the future.
Many thanks to Henry Holt and Co. and to NetGalley for this ARC for review. This is my honest opinion.
ABOUT THE AUTHOR:

Dan Gemeinhart lives in a small town smack dab in the middle of Washington state with his wife and three young daughters. He was lucky and grateful to be a teacher-librarian in an elementary school for thirteen years, where he got to share awesome books with awesome kids. He loves camping, cooking and traveling. He also plays guitar (badly) and reads (constantly). His house is always a mess. He is really pretty darn happy.
web | twitter