BLOG TOUR - A Secret in the Family 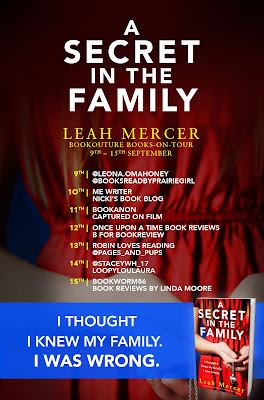 Rachel sat at the kitchen table, trying to take everything in. She still couldn’t believe what her father had done. Clutching a faded photograph and a necklace in her hands, all she knew was that in her mother’s final days, she would do anything to protect her.The call came on a seemingly ordinary day. But as soon as Rachel heard the pain in her sister’s voice, she had to face the fact that life as she knew it was about to be shattered: “It’s mum. She’s not well. She doesn’t have much time.”Though her heart breaks to leave her husband and children behind, Rachel knows the right thing is to return home to care for her mother Janet. Their relationship has been strained for years. This may be the last chance for them both to heal.Walking up to the front gate of her childhood home, Rachel is overwhelmed with memories: of hazy summers playing with her sister, of laughter ringing through the house, of the accident which cost their father his life. After that day, Rachel’s relationship with her mother changed forever.Rachel has never forgiven herself for what happened and it is clear Janet hasn’t either. Determined to make amends, Rachel begins to get her mother’s house in order. But hidden in the cellar, Rachel unearths a devastating secret. A faded photograph and a tarnished necklace are the only clues to unravelling a secret that should have remained hidden.Can Rachel unravel the mystery when it has the power to destroy her family? And when she finally discovers the truth, will it destroy everything she has ever known?A completely addictive and heartwrenching story about deception and the secrets that lie behind a seemingly ordinary family. Perfect for fans of Liane Moriarty, Barbara O’Neal and The Silent Daughter 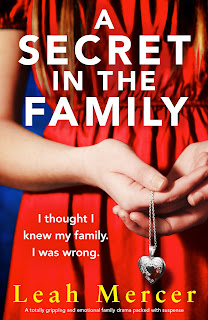 Title:   A Secret in the Family
Author:  Leah Mercer
Publisher:  Bookouture
Genre:   Psychological Thriller
Format:  Kindle ARC
No. of Pages:   248
Date of Publication:   September 9, 2022
My Rating:  4 Stars
Rachel has been plagued with guilt for years over the death of her father. She has always believed that his death was her fault, and her guilt became so overwhelming, and her mother's grief was so devastating, that the two became completely alienated. However, Rachel receives a phone call from her sister informing her that her mother's health is rapidly declining and she needs constant care. Rachel agrees to leave her husband and children to give her mother the care she needs. Rachel's loving husband encourages Rachel to take all of the time she needs.
If Rachel's mum has very little time, she will do what she can to make amends by taking care of her to the best of her ability. Perhaps the time Rachel will be spending with her mother will help the two repair the rift that is between them.
This will be no easy task for Rachel, as happy memories of her past clash with very sad memories. In fact, her father's death apparently changed everything between her and her mother. Not only does Rachel become her mother's nurse, she also works to get the house in order, making or arranging for any repairs to be done. By so doing, Rachel stumbles upon an old photograph and also a necklace. She feels these two items are clues to a secret. A secret that will destroy her family beyond repair.
A Secret in the Family is a taut, emotional read. One that pulls at your heartstrings, especially as revelations are revealed one-by-one. It was impossible not to feel the burden of Rachel's pain as she dealt with her feelings of guilt. While she no doubt hoped to repair the past, her realization that the items she found might make that impossible. The twists in this book were utterly shocking, and along with excellent pacing, this book proved to be a truly enjoyable read, one that led to a stunning conclusion.
Many thanks to Bookouture and to NetGalley for this ARC for review. This is my honest opinion. 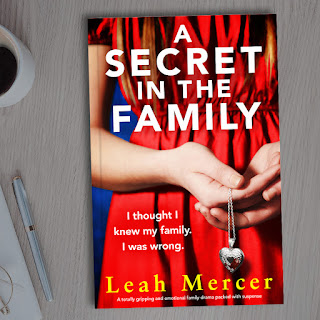 Leah Mercer was born in Halifax, Nova Scotia, on the east coast of Canada. Her first ambition was to be a journalist, but after completing a master’s in journalism, she soon realised she preferred anything other than reporting the news. After trying her hand at public relations, teaching and recruitment in various countries around the world, she finally settled in London and returned to writing… fiction, this time. Her first two novels, Who We Were Before and The Man I Thought You Were, were shortlisted at the UK’s Romantic Novelists’ Association Awards. Leah loves books, running and visiting historic houses with her husband and their son.