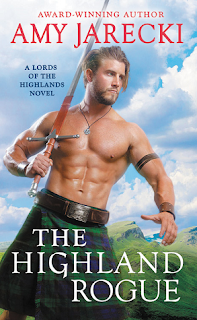 Fans of Diana Gabaldon and Hannah Howell will devour this Scottish romance about a courageous Highlander who falls for a strong-willed lass on the treacherous high seas.

THE DANGER TO HIS LIFE...

After a vicious attack on his ship, Sir Kennan Cameron washes ashore on a deserted Scottish island, nearly dead. But he soon finds he's not as alone as he thought. Kennan knows he can't stay on the island, but neither can he leave the brave and bonny lass who has nursed him back to health—even if she is from a rival clan.

IS NOTHING COMPARED TO THE DANGER TO HIS HEART

Abandoned by her family, Divana Campbell is both terrified and relieved when a rugged Highlander drags himself from the surf. Trusting Kennan is her only chance for survival—and by the time they arrive at his castle, she can barely imagine life without him. But as the heir to a powerful chieftain, Kennan could never marry the likes of her.

Together, they'll brave tempests, pirates, betrayal, and ruin. But soon Kennan must decide what matters most: his thirst for vengeance or the woman who's won his heart.

Amy Jarecki has written a wonderful Highland series and I have been here for each and every installment. This was not one of my favorites, but was an enjoyable read nonetheless.

Sir Kennan Cameron was seriously injured after his ship was attacked. He was found when he washed ashore by Divana Campbell. This was a godsend to Divana as her family abandoned her and she was surviving alone on a Scottish Island. She had faith that they would come back for her, but that simply had not happened. Divana truly hopes that her fortune has changed when she meets Kennan.

She is shocked to discover that he has a remarkable castle, and that he would do just about anything to keep her safe. It should come to no surprise that Divana easily fell for Kennan. However, as he is heir to a chieftain, Kennan must marry equally, and therefore, Divana would not suit. Nonetheless, the two share powerful chemistry and cannot resist the temptation that comes with that. Meanwhile, Kennan must avenge those who pirated his ship, so his attention to Divana is divided. At some point, however, the futures must be decided upon, even if it ends in heartbreak.

This was a busy, fast-moving story, even though it felt a bit unreal at times. On the one hand, Divana proved to be strong enough to survive on an island, to me she proved to be rather vapid and dense. The next book in the Lords of the Highland series is The Highland Laird, which is set for release this fall.