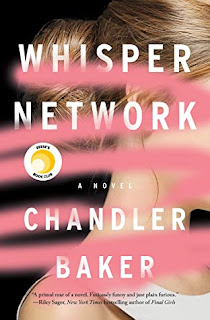 Four women learn their boss (a man who’s always been surrounded by rumors about how he treats women) is next in line to be CEO—what will happen when they decide enough is enough?

Sloane, Ardie, Grace, and Rosalita are four women who have worked at Truviv, Inc., for years. The sudden death of Truviv's CEO means their boss, Ames, will likely take over the entire company. Ames is a complicated man, a man they’ve all known for a long time, a man who’s always been surrounded by...whispers. Whispers that have always been ignored by those in charge. But the world has changed, and the women are watching Ames’s latest promotion differently. This time, they’ve decided enough is enough.

Sloane and her colleagues set in motion a catastrophic shift within every floor and department of the Truviv offices. All four women’s lives—as women, colleagues, mothers, wives, friends, even adversaries—will change dramatically as a result.

"If only you had listened to us,” they tell us on page one, “none of this would have happened."
Link to purchase the book

Whisper Network  gave me vibes of the blockbuster film Nine to Five. This book has four protagonists, Sloane, Ardie, Grace and Rosalita. They all have worked at the Truviv firm for years and with the death of their company's CEO, their boss Ames is about to take over the reins. The book gets the title because throughout the company, there have been constant "whispers" of sexual abuse Ames had consistently gotten away with.

The women feel that if this man takes over he will never have to account for his actions and that more women could be hurt. The women plan a coupe, so to speak, and this will shake up the company from the ground up. Nothing will ever be the same, no matter the cost.

I had to check the genre more than once, because this book gave me more of a feel of a thriller rather than woman's fiction. That is because in the age #metoo, it is often a terrible, uphill battle for women to be heard and for the perpetrator to be brought to justice. This book by Chandler Baker is utterly, albeit sadly, relatable. I so wanted for these four women - for all the women in the company - to have their voices heard and to get justice.

Many thanks to Flatiron Books and to NetGalley for this ARC for review. This is my honest opinion.

Chandler Baker lives in Austin, TX with her husband and toddler where she also works as a corporate attorney. Before that, she grew up in Sarasota, Florida, went to college at the University of Pennsylvania in Philadelphia, did a stint at a D.C. firm and worked in Dallas for a major sports franchise. Now, she can usually be found listening to audiobooks at two times the normal speed, overspending at bookstores or obsessing over true crime. She is the author of five young adult books. Whisper Network is her first adult novel.