Review - The Girl You Gave Away 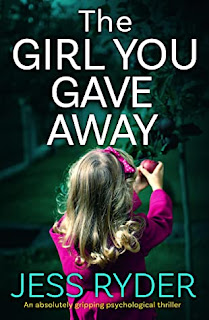 All she wanted was the life they had…

It is the day of Erin’s fortieth birthday party. Pink and silver balloons drift through her garden, the platters of food are empty and the recycling is overflowing with empty wine bottles.

As Erin mingles with groups of family and friends, surrounded by love and laughter, she feels like the luckiest woman alive. She has no idea what fate has in store …

Then a little red envelope lands on the doormat and everything changes.

Inside is a birthday card from somebody she never dreamed would get in touch. Its message is a chilling reminder of the dark past that Erin has worked so hard to bury, a past that could put her precious family in terrible danger…

A gripping, spine-chilling read brimming with secrets and lies. If you loved The Girl on the Train or The Woman in the Window then this dark, twisting psychological thriller from bestselling author Jess Ryder is guaranteed to have you gripped.

Erin has her fortieth birthday party all planned. It will be more than perfect, despite a eerie feeling that something just might go wrong. For starters, Erin has been getting little things that bring up unpleasant memories of her past - and she has hidden these things from her family. When she gets birthday card on her doormat, it is not like the others. Instead, her past has just landed right in front of her. This card, and the other reminders she has received, just might prove to be the undoing of her perfect little family.

The Girl You Gave Away is indeed a taut psychological thriller that definitely kept me on the edge of my seat. The secrets and lies that Erin held onto were delivered in a past and present manner. The past shows that Erin got pregnant while a teenager and gave her daughter up, and this is something she never shared with her family. When her daughter shows up at her birthday, Erin's careful life begins to unravel.

Erin never presented as a dark, sinister woman, just a woman who was shamed of her past and who worried what her secrets might do to her family. Conversely, Jade, her long-lost daughter, is not what she seemed and was most certainly the type of character I would never like to meet.

There were several disturbing factors in this book which did garner my attention, but often made me cringe. I was, however, able to be shocked at the real truth of the matter and, although I wished more of a satisfying ending, I couldn't put this book down.

We authors love it when we get a fantastic five star review and hate it when we get a bad one. That’s only natural, isn’t it? Everyone enjoys praise and nobody wants months of hard sweat to be dismissed in a few damning words. These days, reader reviews are more important than ever. With the dominance of Amazon, star ratings are crucial to sales and readers often seem more interested in what other readers have to say than the retail blurb put out by the publisher. Authors can refuse to read reviews but they can’t pretend they don’t matter, because they do. 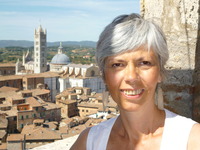 There was a time – long, long ago – when the only reviews a writer ever received were from professional journalists and they only appeared in print. I remember coming back on the coach from Wales, after the premiere of my play ‘A Solitary Confinement’ at the Taliesin Theatre, a huge bouquet of flowers stuffed awkwardly between my thighs, stopping at a service station on the M4 and nervously buying The Guardian. To be honest, it wasn’t a brilliant review and the joy I’d been feeling up to that point wilted more quickly than the flowers. In contrast, the local Swansea paper had praised the production to the skies and the audience had responded really positively. Maybe The Guardian knew best, but it didn’t seem fair that one person’s opinion should hold such sway.

Then the era of people-power dawned. I discovered that readers were taking time out of their busy lives not only to read my books, but to comment on them. Because they wanted to connect with me and other readers, not because it was their job. I was amazed and rather touched. I was also taken aback at how spiteful a very small number of people could be, but that’s life… We authors have to be careful. Get too hung up on the bad reviews, or too high on the effusive ones and we’re in trouble.

This year, Bookouture published my first two psychological thrillers – LIE TO ME and THE GOOD SISTER. I screwed my courage to the sticking place and read many of the reviews, especially from the bloggers. There are some incredibly dedicated people around, so generous with their time, so perceptive and intelligent. I’m building up a sense of what really pulls a reader in, how they want to relate to the characters, how they love twists and satisfying endings. It’s all very helpful stuff for future books. Common themes turn up in the reviews – for example, with THE GOOD SISTER, many readers enjoyed the tricks I played with changing perspectives. That was a risk on my part and I’m thrilled to know it paid off. Now, rather than feeling vulnerable to criticism, I actually feel supported. Thanks to everyone who has taken the time to review my novels this year. It’s much appreciated.