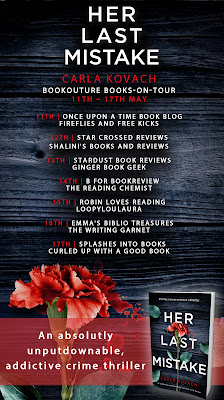 Today is my stop on the Blog Tour for Her Last Mistake by Carla Kovach.

Dressed in a sage green bridesmaid dress, and smiling for pictures, Holly is the happiest she’s ever been. Hours later, Holly is dead.

People love to hate Holly Long. Smart, beautiful and a woman who men find it hard to say no to, she’s the town’s most gossiped about resident.

Now Holly’s body lies in her hotel room, strangled at her best friend’s wedding party. And the gossip has stopped, because nobody wants to look like they did it.

When police search Holly’s immaculate apartment, amongst her stylish furnishings and expensive jewellery, they discover a different side to Holly. Orderly and precise, she wasn’t the chaotic party girl everyone thought her to be. In fact, Holly was a planner, and her next plan was to come out and tell her biggest secret – something she had been hiding for months, something that had the potential to ruin the lives of more than one wedding guest.

There are plenty of people who might have wanted to kill Holly, but only one who has finally made good on their promise.

An unputdownable crime thriller with an ending you will never see coming, this is the latest gripping novel from bestselling author Carla Kovach. If you like Angela Marsons, Cara Hunter and Clare Mackintosh, you’ll love Her Last Mistake. 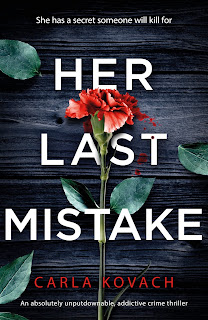 Detective Gina Harte must work hard to find out why a bridesmaid was killed shortly after a wedding reception. Upon further investigation, Gina discovers that there is a pattern that is starting to develop and it will end up costing more than one life. Meanwhile, not only is Gina trying to draw closer to her daughter Hannah, she is trying to examine her relationship with DCI Briggs, all while having painful memories of her past. To say that Gina has her hands full is an understatement.

During the post-mortem examination, there is something about Holly that was kept secret from everyone, even her three best friends - one of whom is the bride. There was another secret Holly was hiding along the way, and that just might end up with more than her life being taken. The question remains, why was Holly killed?

With Gina being thrust into a complicated case, quite a bit of friction arises between her and Hannah. Gina is forced to put her job first, and that includes interviewing more than one possible suspect. This book was excellent, because there is one character who stood out to me and waiting to see what would happen further garnered my attention. This book had plenty of surprises along the way. Her Last Mistake is the 6th book in the Detective Gina Harte series. It was a perfect addition to a compelling series. I look forward to reading the next installment. 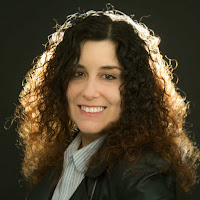