Review - With Kisses From Cécile 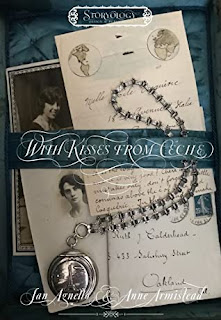 A STORY OF LOVE AND REDEMPTION, DRAWN FROM REAL-LIFE

Visiting Paris to find out more about her great-grandmother’s World-War-I-era pen pal Cécile, a forlorn Maggie, reeling from discovering her husband’s infidelity, learns of devastating one-hundred-year-old secrets involving loss and forgiveness. Revelations about her family’s past challenge Maggie’s decision to face her future alone.

Maggie Ruth Mitchell’s failed reconciliation with her unfaithful husband leaves her heartbroken—and pregnant. She accepts her family’s invitation to Paris to pay homage to Cécile, whose World War One era pen pal letters to Maggie’s great-grandmother Ruth are cherished family mementos. Through reading Cécile’s letters and learning about Ruth’s tragic past, will Maggie find the strength to forgive and love again?

In the year 1919 following World War One, Ruth and Cécile begin corresponding through an American-French pen pal program. Cécile is fighting against consumption, a life-threatening illness. Ruth is hiding the truth about a tragic death that has torn her family apart. She draws strength to face what fate brings from her pen pal’s inspiring letters, each signed With Kisses from Cécile.

I loved this sensitive story from Anne Armistead and how it was based on the true story of her great-grandmother. It was written in letter format that covered two timelines from the life of Ruth along with her pen pal Cécile.

Maggie is undergoing some serious trials in her life and marriage and she received the lovely gift of a trip to Paris from her grandmother. Her grandmother hopes that this trip will help Maggie to deal with her feelings of sadness, pain and regret. During the long flight, her grandmother gives her a box of letters that was given to her from her mother, and Maggie begins to read them. The first letter in this story is from Ruth to Cécile and was written in 1919. Maggie reads the letters as they were written, going back between her great-grandmother's and Cécile's. I loved how Maggie was able to discuss certain points with her grandmother as she pondered each letter.

The letters touched on both warm and tragic experiences that the women experienced over the years and how they came to become pen pals. Although I never had a pen pal, I know some that do, and they have often spoke of the wonderful experiences, including very honest feelings, sadness and life's failures as time wears on.

In most cases, I review digital ARCs, but in this case the author provided me a print ARC. This was a true bonus due to the wonderful black and white photos that I have gazed at more than once.

Thank you to Anne Armistead for this ARC for review. This is my honest opinion. 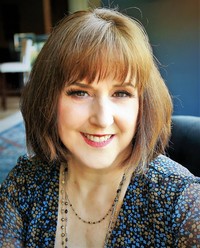 When she’s not wearing her story-telling hat as Anne Armistead, writer of romance stories past and present, she’s Sandra Havriluk—wife, mom of two grown daughters and a rescue mutt named Jackpot, and former English teacher. She earned her English literature degree from the University of Georgia and her MFA in Creative Writing from Spalding University and is a member of the Atlanta Writers Club, the Southeastern Writers Association, and the Historical Novel Society.  WITH KISSES FROM CÉCILE is her second romance, following the publication of DANGEROUS CONJURINGS (Soul Mate Publishing, April 2018).  Anne writes for and serves as an editor with Storyology Design and Publication.
​
web | twitter