COVER REVEAL - An Eye for an Eye 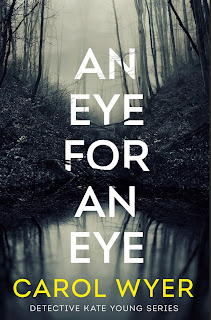 AN EYE FOR AN EYE by
Carol Wyer
A killer running rings around the police. A detective spiralling out of control.
DI Kate Young is on leave. She’s the force’s best detective, but her bosses know she’s under pressure, on medication and overcoming trauma. So after her bad judgement call leads to a narrowly averted public disaster, they’re sure all she needs is a rest.
But when Staffordshire Police summon her back to work on a murder case, it’s a harder, more suspicious Kate Young who returns. With a new ruthlessness, she sets about tracking down a clinical, calculating serial killer who is torturing victims and leaving clues to taunt the police. Spurred on by her reporter husband, Young begins to suspect that the murderer might be closer than she ever imagined.
As she works to uncover the truth, Young unravels a network of secrets and lies, with even those closest to her having something to hide. But with her own competence—and her grip on reality—called into question, can she unmask the killer before they strike again?
Out February 4th 2021 but available to pre order now
Amazon UK: https://amzn.to/2XeuuDv
Amazon US: shorturl.at/yFHRS
Posted by Robin Loves Reading at 5/29/2020 12:00:00 PM