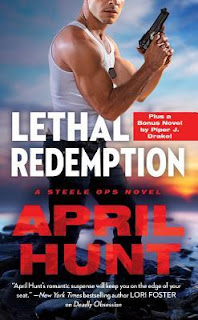 April Hunt “will keep you on the edge of your seat” (Lori Foster, New York Times bestselling author) in this heart-pounding new romantic suspense.

Top FBI profiler Grace Steele was just a girl when she escaped the Order of the New Dawn, and she’s spent the last seventeen years trying to forget her time there. But when private security firm Steele Ops needs her help extracting a young woman from the secretive cult’s clutches, she’s all in. Even though the mission requires posing as the fiancée of the only man who’s ever broken her heart.

It’s been nine years since Cade Wright turned his back on his childhood sweetheart, and he’s never stopped regretting it. Now that they’re forced to work together, he knows this is his opportunity to show Grace how much he’s changed. But the deeper they get pulled into New Dawn, the clearer it becomes that the demons still haunting Grace are very real, and Cade will have to risk everything to keep her safe . . . including his own life.

Lately I have read more than a few books with people who have managed to escape from cults and who have managed to really make something of their lives. In Lethal Redemption by April Hunt, our female protagonist Grace Steele, now an FBI profiler, was able to escape the Order of the New Dawn when she was much younger, and has done her best to bury her troubling memories while she was there. However when the Steele Ops private security agency requests her help rescuing a woman named Sarah Brandt, she agrees, even though she knows she will be plagued by disturbing memories.

Cade Wright, who works with Steele Ops is the man that Grace will be working with in order to rescue Sarah. This could be problematic because Cade and Grace have a past, one that ended over nine years earlier. Working together just might give Cade another chance with Grace, a chance to prove to her that he has changed, that he is worthy of another chance.

Lethal Redemption is an incredibly intense book! We have at least three things going on in this book - rescuing Sarah, Grace's traumatic past with the cult, especially considering who one of the cult members were and how this still affects her today and then the growing relationship she has with Cade. These scenarios, with a mix of past and present, work remarkably well together to create an incredibly compulsive read.

I loved how Grace and Cade had to "pretend" to be a couple in order to infiltrate the cult. Their history, which at one point ended on a very bad note, combined with long-buried feelings forcing their way to the surface, added an incredible amount of tension to what was already a compelling story. The first book in this series, Deadly Obsession, was equally impressive, leaving me excited to read the next book in the series, Fatal Deception, which is currently in my TBR.