AUDIOBOOK REVIEW - To Sleep In a Sea Of Stars 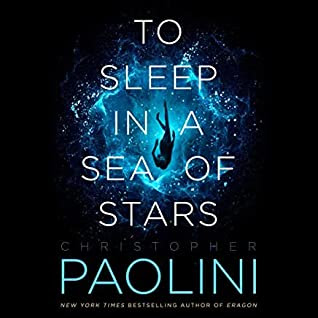 A brand new space opera on an epic scale from the New York Times bestselling author of a beloved YA fantasy series.

It was supposed to be a routine research mission on an uncolonized planet. But when xenobiologist Kira Navárez finds an alien relic beneath the surface of the world, the outcome transforms her forever and will alter the course of human history.

Her journey to discover the truth about the alien civilization will thrust her into the wonders and nightmares of first contact, epic space battles for the fate of humankind, and the farthest reaches of the galaxy.

Kira Navárez is a xenobiologist in the year 2257. Her job is to to visit and build new colonies. She is on the planet Adrasteia. At first she is torn between settling with her boyfriend Alan, then they notice something very strange. What happens is that she discovers an alien artifact that changes her in ways she could not imagine. Kira then becomes a host to this artifact, a dust that becomes part of her. This dust, referred to as a xeno starts a series of events and changes to Kira that lead to tragic circumstances. This situation potentially has an ultimate effect on the fate of the human race. This book is true space opera at its very best.

It should be noted that I am not really a science fiction fan. I can just about count on one hand the number of sci fi books I have read in recent years. But I do know that for a book of this genre to work, there has to be a good mix of character and world-building. I feel that Christopher Paolini did an exceptional job with both. To add to this, the plot was excellent and captivating.

The length of the book did not deter me. I must admit that I am very pleased that I was able to get this review copy as an audiobook, because the length as well as the content might have been difficult for me to read in a traditional format such as print. Granted, it is the longest book I have read this year, so I decided beforehand to break it up into several sections. I wanted to enjoy the story, but I also wanted time to ponder over it during the times I stepped away from it. However, that proved to be an impossible task. I began the book about midnight, slept, resumed at 6 a.m. and with only a couple of short breaks, I listened to this book straight through, at 1.75 speed. In some cases I do listen at a faster speed, but because of the meatiness of this book, I wanted the devour as well as absorb the entire story, and I was definitely able to do this.

At the end of the audiobook, Christopher Paolini discusses his writing process for this book, and this was very intriguing, giving the reader a glimpse of the mind of a writer. He also interviewed the narrator, Jennifer Hale. I was shocked to discover that this is her first time ever performing an audiobook. How she did voices for dozens of characters was absolutely incredible! Whether human, alien or robot, her performance was spot on. Because I am a lover of audiobooks, a good narrator can make or break a book. What Jennifer Hale has done is to enhance an already well-written story.

Whether watching Kira go through the many changes after taken over by the dust, meeting the multitude of other characters, including alien life forces, or the ship's robot, I was drawn into this story from beginning to end. The drama was excellent and the book quite exciting. I am more than pleased that I took a chance with this genre because I was treated to an excellent read.

Many thanks to Macmillan Audio and to NetGalley for this ARC for review. This is my honest opinion.

Christopher Paolini was born in Southern California and has lived most of his life in Paradise Valley, Montana. He published his first novel, Eragon, in 2003 at the age of nineteen, and quickly became a publishing phenomenon. His Inheritance Cycle—Eragon and its three sequels—have sold nearly 40 million copies worldwide. To Sleep in a Sea of Stars is his first adult novel.

Visit Paolini.net for the latest news about this project and connect with other fans at Shurtugal.com, his Facebook page and Twitter profile.