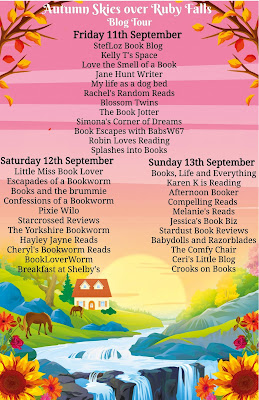 DESCRIPTION:
Get swept away to the sparkling Cornish coast with the stunning new novel from bestselling author Holly Martin. Autumn Skies Over Ruby Falls is the perfect romantic treat to snuggle up with this autumn.
Clover Philips is exactly where she’s meant to be – back home on Jewel Island teaching dance to the guests at the beautiful Sapphire Bay Hotel that she co-owns with her sisters Skye and Aria. Her life is complete, except for one thing…
When Clover left London she also left behind a devastating betrayal. She hasn’t been able to date anyone since, let alone allow herself to fall in love. What she needs is a casual fling to ease herself back into romance. And as luck would have it, the very handsome Angel Mazzeo is back in town.
The chemistry between Clover and Angel has been undeniable ever since Angel first arrived on Jewel Island six months ago. And though content to be her friend till now, Angel is more than willing to help Clover find her dating feet again.
It should be easy to keep things carefree when love is off the table, but when every moment is magical what started as casual soon becomes something much deeper. Will Clover and Angel find the courage to tell each other how they really feel? And is Clover ready to do the one thing she swore she’d never do again, fall in love?
Link to purchase the book 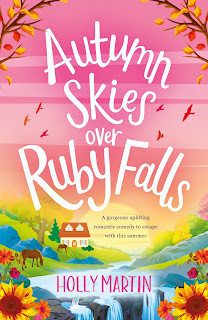 Clover Phillips has a very pleasant job teaching dance, especially as quite a few of her students are of the older generation. Also, she co-owns the Sapphire Bay Hotel with her sisters Skye and Aria. So, all in all, Clover's life is quite content. Having recently experienced a major betrayal in a previous relationship, she never thought she would want to date again. So, if anything was missing in Clover's life, it would be romance, and that is just fine with her.

However, someone from her past, Angel Mazzeo, is back in town and it doesn't take very long for sparks to develop between the two of them. However, Clover's reticence shines through time and again. Despite this, Angel is kind and patient, so just maybe Clover may give him a chance. As they eventually begin dating, Angel promises Clover no expectations, she soon feels comfortable with him.

This touching story is one where Clover comes into her own after being devastatingly hurt before. Angel makes the perfect complement to her because of his giving nature, as his remarkable qualities prove that life does indeed offer second chances.

Meanwhile, this lovely story follows the first book in the series, Sunrise Over Sapphire Bay, where Clover's sister Aria fell in love with Noah. At the same time, however, Clover's twin Skye is not so lucky in love. The prospect is there for Skye, but not without difficulties. I love this continuity in the stories, and really hope hat Skye finds her happily ever after in a future book.

Holly Martin is a very enjoyable author. I have read a few of her books prior to this and always find the stories to be quite endearing. I especially love this story because it is one of second chances, and it is quite sensitive, especially as Clover learns to trust once again. With Clover's situation, someone like Angel was absolutely perfect for her and I love the way Ms. Martin wrote his character. As stated, I am eager for the next book in this series, as I cannot wait to see how Skye comes into her own. 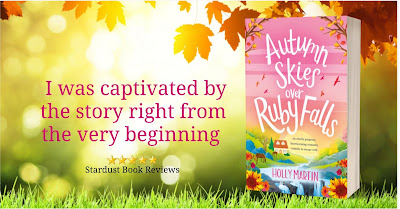