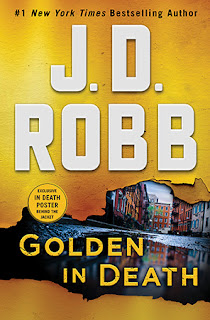 Pediatrician Kent Abner received the package on a beautiful April morning. Inside was a cheap trinket, a golden egg that could be opened into two halves. When he pried it apart, highly toxic airborne fumes entered his body―and killed him.

After Eve Dallas calls the hazmat team―and undergoes testing to reassure both her and her husband that she hasn’t been exposed―it’s time to look into Dr. Abner’s past and relationships. Not every victim Eve encounters is an angel, but it seems that Abner came pretty close―though he did ruffle some feathers over the years by taking stands for the weak and defenseless. While the lab tries to identify the deadly toxin, Eve hunts for the sender. But when someone else dies in the same grisly manner, it becomes clear that she’s dealing with either a madman―or someone who has a hidden and elusive connection to both victims.
Link to purchase the book
MY THOUGHTS:
When detective Eve Dallas approaches a body at a murder scene, her partner Peabody becomes concerned when it is evident that the cause of death was something toxic and if so, whether or not Eve could possibly meet the fate of the victim. Instead, Eve is well garbed and protected, so she approaches the body. As the hazmat team steps in, Eve does indeed undergo testing to assure her team, but especially her husband Roarke that she is indeed fine.
Maybe now Eve can get to the matter of solving this most recent murder. Quite naturally the victim's life is examined while Eve looks for a motive in the man's murder. As things turned out the victim was very well-liked so the suspect pool is small. As Eve and her team learn the method the killer is using, they begin to see the pattern that has been set and work feverishly hard at stopping the killer before any more bodies pile up.
This well-written book shows Eve at her best. There are a couple of things that really drew me to this series, and one of them is the fact that it is set in the future, so their are 'droids who serve as butlers and more, for example. Then there is Roarke, Eve's husband, one of the richest men on and off planet. Whether Roarke is buying a country or another planet, he displays a humble and loving nature, whether with Eve or during the times he helps her with cases. Last outstanding thing is the lighthearted moments in each of the stories. I love how they balance out the gruesome murders and related details as cases are being solved.
Although this is the 50th book in the In Death series, it is a fresh storyline that grabbed my interest from beginning to end. Even though each book has its own story, I truly think that this series should be read in order. Although that would be a huge investment in time, readers will be glad they did because each and every book is well worth it.
Many thanks to St. Martin's Press and to Edelweiss for this ARC for review. This is my honest opinion.
ABOUT THE AUTHOR: