Tears stream down her face as she feels the cold blade press against her neck. The sweet scent of her daughter’s favorite strawberry pancakes all around, her last thought is for her beautiful girl. Please, please let Lisa have escaped.

When Detective Casey White is called early one morning to a beachside vacation campsite in the Outer Banks, she finds the bodies of Carl and Peggy Pearson side-by-side, their throats cut, and their thirteen-year-old daughter Lisa nowhere to be found. Haunted by memories of her own missing girl, Casey fears this could soon become a triple murder: because without the medication found in the bathroom cabinet, Lisa has just days to live.

As her team struggle to untangle the meaning of the cryptic symbol carved into the victims’ skin, Casey searches the area for signs of Lisa: and is rewarded when she finds her blistered and barefoot, staggering along the highway. The girl barely has breath left to whisper ‘he invited me’ before blacking out.

Days later, another couple is found murdered on a vacation yacht. A different symbol is etched on their bodies, and their teenage daughter is also missing. Casey’s only clue is an unsettling ‘invitation’ found on the girl’s phone, to a secluded building out in the cornfields.

Desperate to uncover who is luring these innocent families to their deaths, and certain forensics have missed something vital, Casey matches up the crime scene photos herself. The symbols combine to form an upcoming date. The killer is taunting them with the timing of the next murder.

Racing to follow the invitation in time, when Casey arrives she is shocked to glimpse not the missing girls from this case, but her own missing daughter…

An absolutely addictive mystery thriller that will have you holding your breath until the shocking final twist. Perfect for fans of Kendra Elliot, Robert Dugoni and Melinda Leigh.

A church or a cult. Why is it drawing teens, leaving carnage along the way? That is what Detective Casey White starts to discover as she is first called to the murder scene of a couple. There is evidence that their thirteen-year-old daughter is missing. Casey knows that it is a race against time, because life-saving meds for the girl, Lisa, are still in the medicine cabinet. How long can the girl go without her meds before she becomes yet another casualty:

Casey does find Lisa, and the girl is in very bad shape. Just before she passes out she whispers "he invited me. I know this is in the book description, but I mention it here in the review, because it is this very phrase that leads Casey to recognizing that these invitations are coming from a very dangerous source, and what is more, is that Casey now sees a direct connection to her missing daughter.

While Casey is sharply focused on the disappearance of her daughter, she finds herself grappling with her ex-husband Ronald. Considering she is now seeing someone, Jericho Flynn, the town's ex-sheriff and now leading marine patrol, the last thing Casey needs is to deal with her ex. What she must focus on is the murders taking place, and the case is getting bigger and bigger. What is more is she is determined to find Hannah.

Casey would do anything to find Hannah, even placing her own life on the line. What intensity! THe teens that Casey runs unto remind me of a horror movie I saw decades ago, Children of the Corn. Utterly eerie, to say the least. This thrilling book pretty much cost me a night's sleep - it is that good, that riveting, so utterly compelling. I found Casey to be quite relatable and I also loved to see her relationship with Jericho go through changes during this difficult time for her.

Many thanks to Bookouture and to NetGalley for this ARC for review. This is my honest opinon. 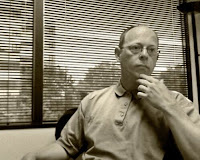 I'm a resident of Virginia, living with my wife and children, along with three cats (sometimes more), a mouse, parrot, lizard and the funniest chinchilla on the east coast.

Although I live in Virginia, my heart is still in Philadelphia, Pennsylvania where I grew up. And I hope that one day, I'll be able to call Philadelphia home again.

Growing up, I liked to read short stories, but struggled with the words. You see, I had a secret: a sad little secret. Ashamed and embarrassed, I was the little kid in the back row of the schoolroom, quietly moving my lips along with the class while everyone read aloud. I couldn't read. I couldn't write. I hoped nobody would notice, but they did. They always did.

By the time I'd reached the fourth grade, my secret wasn't a secret anymore. The teachers knew something was wrong. Dyslexia. Maybe that is why I liked science fiction so much? All those crazy looking glyphs on the screen, glowing, flashing.
The fix? Back to the third grade for me, and then special classes three days a week. It worked. Once I started reading, I never stopped. Stephen King, Piers Anthony, Dean Koontz, and even the Judy Blume books my sisters discarded.

I'm still one of the slowest readers I know, but school was never a problem again. I finally graduated the third grade, and then kept on going until I finished my Masters.


These days, I work as an engineer and spend my nights writing, editing and thinking up the next great story.