DESCRIPTION:
DISCOVER A TALENTED NEW CRIME WRITER
SET UNDER THE BROODING SKIES OF NORTH NORFOLK. MEET SARA HIRST AS SHE SEARCHES FOR HER LOST FATHER AND FINDS THAT GREAT BEAUTY CAN CONCEAL GREAT VIOLENCE.
Detective Sara Hirst has moved to Norfolk Police's Serious Crimes Unit, leaving behind her mother in London. Her mother won't tell Sara the truth about her father. Sara has come to Norfolk to find out why he abandoned her.
Her first call-out is a decomposing body discovered in a ditch on a local farm. How does the murder relate to a recent spate of farm thefts and who wanted the man dead?
THEN THE CASE GROWS VERY PERSONAL . . .
Perfect for fans of Joy Ellis, JM Dalgiesh or Angela Marsons, this explosive debut will have you turning the pages till the stunning end.
Link to purchase the book
MY THOUGHTS: 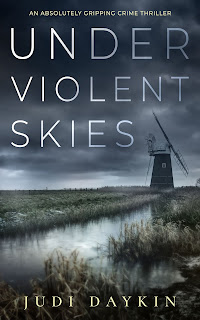 Title:   Under Violent Skies
Author:  Judi Daykin
Publisher:  Joffe Books
Genre:   Mystery/Thrillers
Format:  Kindle ARC
No. of Pages:   281
Date of Publication:   September 24, 2020
My Rating:  3 Stars
DS Sara Hirst has just begun a new job as a black woman in a mostly white environment. From the very start she is met with racism and sexism, even hazing from some at the police station from those who didn't think she deserved the job, so jealousy was also a factor. As Sara starts to work on her first case at the police station, she finds out that racism is behind the murder she is investigating.
The murder took place in a farming community and as things begin to unfold something is certainly not right. As a matter of fact, it is quite tragic. In a different narration, there are two women, one who is being held against her will and is continually being assaulted. Then there is an elderly woman whose land is at stake. Someone wants to buy it and will not take no for an answer.
But there is something more. Sara took that new job in Norwich because previously she found some information about the father she never knew. Her mother would not talk about her father but she found something that could be clues as to who he was.
This story does indeed have a lot going on. How do all these things tie together and to what extent do they affect Sara? This book pulls all these stories together in a way that begs the reader's attention. It was difficult to follow at times but it does all come together.
Under a Violent Skies is a promising debut novel by Judi Daykin. Not sure if this will eventually become part of a series, but if it does, Sara is someone easily able to relate to and it would be nice to see whether or not she manages to thrive in her work environment all while successfully managing difficult cases.
Many thanks to Joffe books and to NetGalley for this ARC for review. This is my honest opinion.
ABOUT THE AUTHOR:

Yorkshire born, Judi has lived, worked and made theatre in Norfolk for the last forty years. She completed her MA in Creative Writing (Crime Fiction) at the University of East Anglia (UEA), and her debut novel was shortlisted for the Little, Brown UEA writer's prize in 2019.
'I love the beautiful, vast skies and watery landscapes of Norfolk. Our home in a village on the north coast can feel wonderfully remote, even though the nearest town is only a few miles away. I can't imagine living anywhere better than this.'
Judi is also a working actor, and has been known to twiddle the knobs on the sound desk for the variety shows at Cromer Pier. She runs her own theatre company, Broad Horizons, specialising in commissioning new plays recovering and retelling women's stories.
FOLLOW JUDI ON
FACEBOOK
TWITTER