BLOG TOUR - Into the Burning Dawn 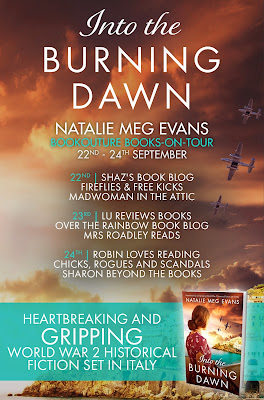 DESCRIPTION:
In the terrace courtyard of the palazzo overlooking a sparkling bay, the scent of ripening lemons filled the air. His deep brown eyes gazed into hers with determination and longing. ‘Will you do it? Risk everything and join us?’

Twenty-one-year-old Imogen Fitzgerald was raised in an English orphanage and never knew her parents. So when World War Two breaks out, she refuses to leave the life she’s worked so hard to build for herself, teaching English to little Marco and Eloisa in the beautiful Italian city of Naples. With their father Giancarlo away fighting for the fascists, there’s no one else to care for these lost children. Imogen’s dark hair and perfect Italian will protect her for now, but if anyone discovers her secret identity as an enemy of Italy, Marco and Eloisa will be left with no one.

As the shadows of bomber planes darken the azure-blue waters of the bay, the one person Imogen can depend on is Fabrizio, the children’s uncle. He’s never seen eye-to-eye with their father, and Imogen is forbidden to speak to him… but whenever they secretly meet in the lemon groves Imogen instantly feels safe. Fabrizio talks passionately of the resistenza, the underground group fighting the regime, and soon Imogen herself is involved – smuggling food along the rocky coast, and even supplying information on Giancarlo to help fight the Nazis and end this awful war.

But when Giancarlo suddenly returns, injured from the fighting, Imogen is shocked to find him much changed. Rather than the fascist sympathiser she knew and resented, she sees in Giancarlo a man who would do anything to protect his children and his beloved Italy. Was she wrong to expose him as a traitor?

Torn between two sides, Imogen’s own life is thrown into terrible danger when a child goes missing and her secret identity is exposed… did she put her trust in the wrong man? And is it too late to save herself, and the children from the horrors of war?

An absolutely stunning and evocative historical read about the bravery of ordinary people in dark times, that will sweep you away to the breath-taking coastline of Italy. Perfect for fans of The Nightingale, The Tuscan Child and All the Light We Cannot See.
BUY LINKS:
https://geni.us/B08FMWPPDNSocial
MY THOUGHTS: 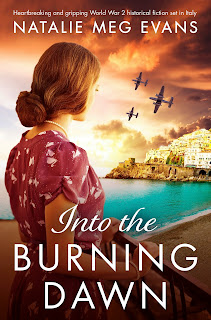 Title:   Into the Burning Dawn
Author:  Natalie Meg Evans
Publisher:  Bookouture
Genre:   Historical Fiction
Format:  Kindle ARC
No. of Pages:   468
Date of Publication:   September 22, 2020
My Rating:   4 Stars
Imogen Fitzgerald finds herself employed by a stern man names Giancarlo, Count de Trosini, in Naples. Imogen never quite felt comfortable around him, as a matter of fact, Imogen finds herself rather drawn to Giancarlo's half brother Fabrizio. The brothers are not close, and act more like business associates than brothers. Imogen becomes a tutor to his Giancarlo's children, Marco and Eloise. However, soon she finds herself involved in matters other than the children.
At only twenty-one years of age and not much experience as a teacher, she does do her best with Eloísa and Marco. Fortunately she had completed her teacher training despite her upbringing as a as an orphan. Through an interesting series of event, Imogen finds herself acting as a spy, creeping around, sharing secrets, and facing danger at every turn. While quite drawn to Fabrizio, her involvement with Giancarlo‘s two children is about to completely change.
Mussolini is changing the very way of life for those in Italy, to say the least. As it is, Italy had already been rule for nearly two deacades. Talk of war is nonstop, and this has a ripple effect on everyone involved, including Giancarlo's son Marco. While Imogen would rather get back home to England, that proves to be impossible. Life there did not have promise, so now that she is stuck in Naples, she can only hope for a better life. With war on the horizon, returning home is not an option, and everything is about to get far worse. The country is at war with itself and Imogen is well and truly stuck.While Imogen cannot stop thinking about Fabrizio, she watches Giancarlo go through an intriguing transition and begins to see him in a new light.
This book was no easy read. What did it did was to bring back memories of my junior high school history classes when I learned about Mussolini being in power. This book gave me a broader understanding of life in Italy during World War II and how no one remained unscathed by the taint of war. This intense read is was very well-written and a fascinating story. Natalie Meg Evans not only excelled at writing an excellent historical fiction novel, but she also did a fabulous job of weaving romance throughout the pages of this book. I was quite drawn to this well-written story and loved the wonderful ending.
Many thanks to Bookouture and to NetGalley for this ARC for review. This is my honest opinion.
ABOUT THE AUTHOR: 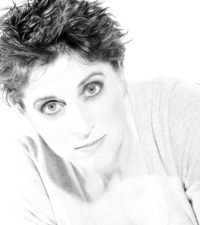 Natalie is a RITA nominated, USA Today Bestselling author of six novels: The Dress Thief, The Milliner's Secret (re-titled "The Girl who Dreamed of Paris"), The Wardrobe Mistress, Summer in the Vineyards, The Secret Vow and most recently, The Paris Girl. Look out for a heartwrenching WW2 inspired novel set in Italy, due out Autumn 2020.
Visit her website at https://www.nataliemegevans.uk
Natalie Meg Evans has had a varied career, first as an actor in London's fringe theatre, then as a PR exec and company director and finally, dream achieved, as a full-time writer. She lives with two very lively dogs in rural mid Suffolk.
Natalie has collected numerous awards for her writing including the UK's Harry Bowling Prize (2012). The Dress Thief was nominated for a coveted RITA Award by Romance Writers of America and it won the Greek Public Book award for the best foreign novel; also, the UK's Festival of Romance readers award (where readers rather than industry professionals select and judge). The Milliner's Secret was shortlisted for the same award.
Natalie was also nominated for the coveted Daphne du Maurier award and was named a finalist for a Romance Writers of America Golden Heart award.
Natalie's titles are available as Spoken Word. She loves to hear from readers.
Visit her website at https://www.nataliemegevans.uk
TWITTER: https://twitter.com/natmegevans
FACEBOOK: https://www.facebook.com/NatalieMegEvans