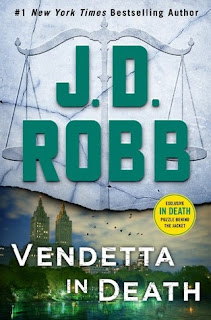 She calls herself Lady Justice. And once she has chosen a man as her target, she turns herself into a tall blonde or a curvaceous redhead, makes herself as alluring and seductive as possible to them. Once they are in her grasp, they are powerless.

The first victim is wealthy businessman Nigel McEnroy. His company’s human resources department has already paid out settlements to a couple of his young victims—but they don’t know that his crimes go far beyond workplace harassment. Lady Justice knows. And in one shocking night of brutality, she makes him pay a much steeper price.

Now Eve Dallas and her husband, Roarke, are combing through the evidence of McEnroy’s secret life. His compulsive need to record his misdeeds provides them with a wide range of suspects, but the true identity of Lady Justice remains elusive. It’s a challenging case, made even more difficult by McEnroy’s widow, who reacts to the investigation with fury, denial, and threats. Meanwhile, Lady Justice’s criminal crusade is escalating rapidly, and if Eve can’t stop this vigilante, there’s no telling how much blood may be spilled…
Link to purchase the book
MY THOUGHTS:
A vicious serial killer calling herself Lady Justice is on the prowl. A master of disguise, this brutal killer has a vendetta against certain individuals and before you know it there the murder of Nigel McEnroy. As Lieutenant Eve Dallas begins her investigation, she queries into the victim's job to see if anyone there wanted him dead. However, due to the brutal nature of his murder, Eve soon finds that she has more questions than answers.
With husband Roarke and her dedicated team, Eve plows into details of the victim'ms life in order to flush out the killer. Along the way a multitude of suspects are questioned, while whoever this Lady Justice proves to be, more bodies are falling.
This thrilling book in the In Death series follows the pattern of the previous books in this series by providing a well-written story, complex and interesting characters, twists and turns and a riveting conclusion.
I was just asked whether this series should be read in order and I truly believe that it should. There is a progression of character development and situations that take place over the entirety of the series and if they are not read in order the reader will miss quite a bit. In part, Eve and Roarke. Their pasts. They can only be truly understood if all the books are read as they were published. Another example is Peabody and how she became Eve's partner, as well as her relationship with cop geek McNab. There are other pivotal characters in this series that have come a long way as well.
As soon as I completed this excellent book in this fabulous series, I moved right on to book #50, Golden in Death.
Many thanks to St. Martin's Press and to Edelweiss for this ARC for review. This is my honest opinion.
ABOUT THE AUTHOR: