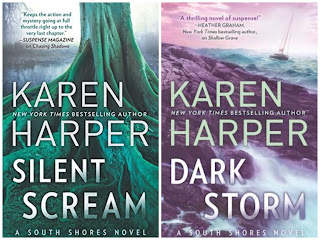 This review includes the last two books in the South Shore series by Karen Harper. I reviewed the four previous titles and the links are all below the Dark Storm review.

A violent past leads to a present danger…

When an old college roommate invites Claire Britten to join her on an archaeological dig at a Florida peat bog, it’s an offer the renowned forensic psychologist can’t refuse. Claire’s husband, criminal lawyer Nick Markwood, is comforted to see Claire working on a prehistoric burial site instead of an open grave for once. But Claire’s investigative instincts kick in when some of The Black Bog’s perfectly preserved corpses show signs of a grisly fate. What really happened to these people?

What started as an exploration of the past soon escalates into an all-too-current danger. Someone is watching—someone who really doesn’t want Claire digging into the past or Nick making connections to a current, violent murder case he’s investigating. The bog’s corpses may be long dead, but if Claire and Nick don’t figure out who’s gunning for a fresh kill, the next bodies to be discovered will be their own.
Link to purchase the book

In this fifth book in the South Shores series, Claire Britton, a former forensic psychologist, has a chance to join in on an archaeological dig in a Florida bog. Claire has worked some very tough cases. Previously, her life had been in danger. In fact, Nick Markwood, her husband, her ex-husband and even her daughter, have all faced dangerous life-threatening situations. Nick is rather relieved that Claire will get away for awhile and do something she will enjoy.

Things to not go well, however, because the dig literally begins to unearth things someone would rather not be found. If this means that Claire should end up dead, so be it. Therefore, danger has come full force for Claire and Nick yet again.

I have loved Claire's character throughout this series. She has fought a condition of narcolepsy for years, yet she is a true champion. While working along with her friend, Kristen, another character dealing with something serious, prosopognosia, facial blindness. It was very interesting to see and her and Claire work along together.

This was a delightful read and a very nice addition to the series. The mystery started right away, had a few surprising twists and a banger of an ending.

There are some forces you can’t outrun…

Forensic psychologist Claire Markwood has experienced her share of disaster. But nothing could prepare her for her sister, Darcy, going missing. Claire rushes to the butterfly sanctuary where Darcy has been working, prepared to do what she does best—work the clues. But her sister, along with her car and some of the sanctuary’s rarest species of butterflies, has seemingly vanished without a trace.

Amid a flurry of mysterious leads and dead ends, Claire and her criminal lawyer husband, Nick, tap every resource at their disposal. But the deeper they dig, the more unsettling the case becomes, dredging up old family secrets that shake the foundation of everything Claire thought to be true. Because some secrets aren’t just threatening—they’re deadly.

If readers have been following this series, they would have come to known Darcy, Claire Markwood's sister. Claire has a young daughter, and often while dealing with dangerous situations, her sister Darcy would watch her. Darcy has two young children of her own. So, when she turns up missing, everyone is truly concerned.

Darcy was working at a butterfly sanctuary and she simply disappeared. No one can find a single clue. Both Claire and her husband, criminal lawyer Nick, pull out all of the stops to locate Darcy. Shockingly to all involved, Darcy's disappearance brings up long-hidden family secrets. Now that these secrets are being revealed, lives again are in jeopardy.

As this incredible series draws to a close, it was truly rewarding to think that Claire and Nick could have a happy life going forward. However, with Darcy's current situation, that proves hardly possible.

The only odd thing I ran across in this book was Claire's daughter's obsession with a doll. A very strange doll. As a matter of fact, this played greatly into the plot. The story had a tiny bit of a futuristic edge when it came to the extent the doll played in the story, and how this all affected what happened to Darcy.

I have so loved this series! One day I hope to read the entire six books again. I adore Karen Harper's writing and cannot wait to see what else she has in store for readers.