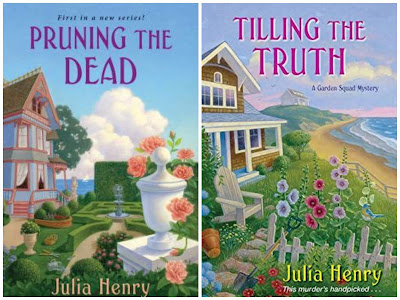 In this adorable cozy mystery series, Garden Squad Mystery, by Julia Henry, our protagonist is a 65-year-old who makes a rather keen amateur detective.

Post-retirement aches and pains can't prevent sixty-five-year-old Lilly Jayne from keeping the most manicured garden in Goosebush, Massachusetts. But as a murder mystery blooms in the sleepy New England town, can a green thumb weed out a killer?

With hundreds flocking to her inaugural garden party, meticulous Lilly Jayne hasn't left a single petal out of place. But the picture-perfect gathering turns unruly upon the arrival of Merilee Frank, Lily's ex-husband's catty third wife. Merilee lives for trouble, so no one is surprised after she drinks too much, shoves a guest into the koi pond, and gets escorted off the property. The real surprise comes days later--when Merilee is found dead in a pile of mulch . . .

Lilly wishes she could stick to pruning roses and forget about Merilee's murder--until her best friend and ex become suspects in an overgrown homicide case. Now, aided by the Garden Squad, an unlikely group of amateur crime solvers with a knack for planting, Lilly knows she has limited time to identify the true culprit and restore order to Goosebush. Because if the murderer's plot isn't nipped in the bud, another victim could be pushing up daisies!
Link to purchase the book

Age is nothing but a number when it comes to our protagonist Lilly Jayne. At sixty-five years of age, she might have considered taking it easy. That is certainly not the case, however. She is bound and determined to have the perfect garden in her town in Massachusetts. Her idyllic bubble is burst when a murder happens right in the middle of things.

Lilly literally plows into the situation. Amateur sleuth on the job. Disturbed by the fact that her garden party has been ruined, especially due to the fact that her best friend and her ex are now suspects, Lilly is determined to find the real killer.

It is a cute cozy mystery, albeit a bit slow, but I wanted to read this one before I read the next in the series, which I got for review.

It’s August in Goosebush, Massachusetts, and go-getter retiree Lilly Jayne and her youthful senior pals show no sign of slowing down during the lazy days of summer. But when murder mows over a pesky local, could a Garden Squad member be nurturing a deadly second act?

While Lilly digs into a town beautification project, her friend Tamara O’Connor has greater concerns than well-pruned geraniums. The real-estate firm owner hasn’t been shy about blaming perennial grouch Gladys Preston for thwarting her many attempts to sell off a beautiful beachside property. But accusations fly when Gladys is suddenly found dead—and Tamara is caught standing over the body with a bloody weapon in her hand . . .

As Tamara becomes the prime murder suspect, Lilly and the Garden Squad ladies set out to prove that someone planted the evidence. With a potpourri of alarming clues scattered around Goosebush, cracking this case means confronting a calculating culprit with a penchant for cutting down anyone who gets in the way . . .

Lilly Jayne did a bang up job as an amateur sleuth in the first book in this series, Pruning the Dead. Now that she has another project - and another murder, Lilly is keen to sort things out. With her friend Tamara as the primary suspect, Lilly works feverishly to discover the killer's identity.

This cute cozy mystery has a few secrets, deviousness and more. Having already seen Lilly at work previously, I did enjoy her way of working on this. This book takes a while to gain traction, but remained an enjoyable read.

I love Lilly, her friends, with the moniker The Garden Squad, are all adorable elders. The intrigue is light-wight and the danger isn't off-putting, thus making this a enjoyable little cozy mystery.

Many thanks to Kensington and to NetGalley for this ARC to review. This is my honest opinion. 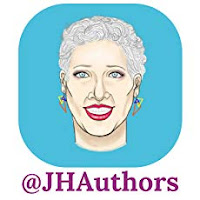 Julia Henry is thrilled to be writing the Garden Squad series for Kensington. The Garden Squad are four friends--Lilly, Delia, Tamara, Ernie--who are clandestine gardeners in their town of Goosebush, MA, solving gardening problems that the red tape of the town is tying up. They also solve mysteries that pop up.