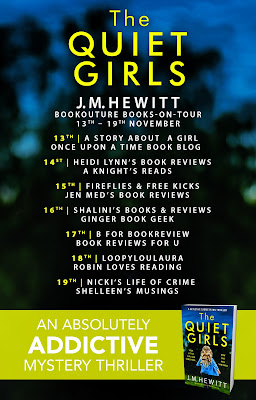 Today is my stop on the Blog Tour for The Quiet Girls by J.M. Hewitt.

‘Hattie!’ Carrie called, an edge to her voice. ‘Hattie, this isn’t funny, come out now.’ Carrie moved through the woods on shaking legs. She tried calling, shouting, screaming, but everything was quiet. Her little sister was gone.

Detective Carrie Flynn’s sister Hattie was kidnapped when they were both little girls. After the police failed to find the culprit, Carrie swore she would become a detective and solve the case herself. But the face of the man who snatched Hattie is a blank in her memory...

Twenty years later, eleven-year-old Melanie Wilson is reported missing, a quiet child who longs to fit in, just like Hattie… Carrie has to fight off memories of her lost sister to concentrate on the case, but she soon finds grainy black-and-white footage of Melanie boarding a boat and vanishing. She discovers Melanie has been taken to Pomona, a deserted island, almost inaccessible from the city. But who took little Melanie, and why?

Then the police receive a desperate cry for help from another young girl: I gave you his name, told you where to find him, but you did nothing. My blood is on your hands. Carrie traces the call to the same docks where Melanie was last seen. Now she has a second missing child to save.

But the sound of the broken voice has unlocked something in Carrie. The blurred face of her sister’s kidnapper is starting to become clearer…

Carrie is sure the lost girls are in terrible danger – and that there’s a link between her sister’s disappearance and this case. To find Melanie, Carrie must unleash the memories she’s buried for years. And if she uses her own demons to bring Melanie home, can she finally find out what happened to her sister?

This absolutely unputdownable thriller will keep you up all night until you reach the final heart-stopping page! Perfect for fans of Angela Marsons, Val McDermid and Lisa Regan. 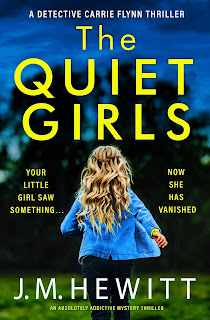 Detective Carrie Flynn has a case involving a missing eleven-year-old named Melanie Wilson, and she is reminded of a tragic time in her childhood when her little sister was missing when they were children.

It is not a cut-and-dried case for Carrie, however. The story focuses first on Melanie and her two friends when something terrible happened to them. Melanie's home life is seen, and her father makes a life-changing decision for their entire family. Another layer to this situation is that at the police station Carrie has received several phone calls from a distraught young woman. Could all three situations be connected?

This multi-layered story touches on a very sensitive subject as danger does indeed draw very close to Melanie. The story is beyond twisted and has more than one storyline. Not only is Melanie's father experiencing as close to a mental break as one could, and this changes everything about the family. Despite the chaos the family ensues, Carrie and her partner do whatever it is they can to locate Melanie and her family.

The Quiet Girls is the first story in the Detective Carrie Flynn series. Carrie's past was explored and we learn what makes her so good at her job now. She was the only character I really liked, although I admired Melanie  Alice, Melanie's mother,  was rather difficult to accept. The story itself was very intriguing and had a thrilling ending. I do look forward to seeing Carrie work on and solve other cases. 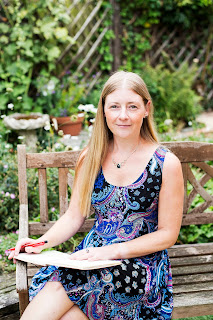 J.M. Hewitt writes crime fiction and is the author of three previous crime fiction novels and has been published in two short story publications. Her work usually incorporates twentieth and twenty-first century events and far flung locations, and her novels explore the darker side of human behaviour.

In contrast to the sometimes dark content of her books, she lives in a seaside town in Suffolk with her dog, Marley.

When she was ten years old she'd read all the books she owned, all those on her mother's bookcase and everything the library had to offer. She decided the only course of action to take was to write her own stories. Thirty years later, she is still writing them.