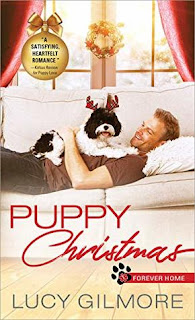 Lila Vasquez might not be the "fun one" at Puppy Promise―the service puppy training school she runs with her sisters―but she can always be counted on to gets things done. So when her latest client shows an interest in princess gowns over power suits, Lila puts aside her scruples, straps on the glittery heels, and gets to work.

If only the adorable six-year-old's father wasn't such an appealing Prince Charming.

Ford's whole life revolves around his daughter...until he meets Lila. Smart, capable, and amazing at helping Emily gain confidence with her new service puppy at her side, Lila is everything he ever wanted―but she's way out of his league. Good thing Emily and her new pup are up to the matchmaking task. This Christmas, it's all hands (and paws) on deck!

Lila Vasquez met a delightful little girl that changed her life forever. Running a service puppy training school with her sisters is rewarding work for certain. However, working with children is definitely not one of her strengths. Ford Ford (yes, that is his name) has the most amazing daughter, six-year-old Emily. Due to her hearing loss, Emily is about to get a service dog, and that comes with one-on-one training. This blessing is due to a fundraiser and the dog and training lessons were offered as a prize.

Lila will be working with Emily and the dog - who Emily promptly names Jeeves von Hinklebottom the Third - all the while fighting an incredible attraction to Ford. Meanwhile, Ford not only has to fight his own attraction, but also his very torn emotional feelings. These feelings include the fact that as a single father, he is very protective as his daughter. Also, his past was rather rocky, and he often wonders whether or not he is good enough for someone as classy as Lila. Lila herself has someone in her past that is rather making a nuisance of himself.

Emily is as sharp as a tack. Lila is her "new friend". Already a special person in her life, and somehow, she is going to make her daddy happy by making Lila much more than a dog trainer. It is also the holidays, so preparations are in order.

What a wonderful story! It is the second in the Forever Home series. The Vasquez sisters, as readers have already met them in Puppy Love, particularly Sophie, have proven that they will go over and above to make their clients happy. Placing just the perfect dog with each family is something they excel at. In this book, Puppy Christmas, Lila measures up to the task marvelously.

Not only is the book based on puppies, an adorable little girl and a very warm romance, but it is filled with humor, family and a touching happily ever after. The next book in the series, Puppy Kisses, is due for release in June.

Many thanks to Sourcebooks Casablanca and to Edelweiss for this ARC to review in exchange for my honest opinion.

Lucy Gilmore is a contemporary romance author with a love of puppies, rainbows, and happily ever afters. She began her reading (and writing) career as an English literature major and ended as a die-hard fan of romance in all forms. When she's not rolling around with her two Akitas, she can be found hiking, biking, or with her nose buried in a book.