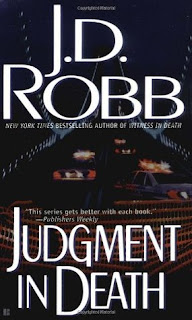 'She stood in Purgatory and studied death. The blood and the gore of it, the ferocity of its glee. It had come to this place with the wilful temper of a child, full of heat and passion and careless brutality.'

In an uptown strip joint a cop is found bludgeoned to death. The weapon's a baseball bat. The motive is a mystery. It's a case of serious overkill that pushes Eve Dallas straight into overdrive. Her investigation uncovers a private club that's more than a hot spot. Purgatory's a last chance for atonement where everyone is judged. Where your ultimate fate depends on your most intimate sins. And where one cop's hidden secrets are about to plunge innocent souls into vice-ridden damnation...

When another cop is murdered, it really gets to detective Eve Dallas. Add to the fact that the murder was utterly brutal makes Eve work even harder. Eve's intense investigation leads her to a private club called Purgatory. Truly, no one wants membership in this club! Everyone is judged based on their actions and after such, receive a horrendous punishment.

As always in this story, Eve's husband Roarke plays a big role in this current case. Not only is Roarke involved, but Eve's friend Mavis even steps in to help Eve. The drama and intrigue was intense in this story, as in all of the previous ones I have enjoyed reading. There is no shortage of murders, so Eve really steps up to the game, as always.

My TBR has been threatening to riot, so unfortunately I missed my monthly read on the In Death series in October. I am looking forward to getting my hands on the next book in the series, Betrayal in Death, as soon as I can.