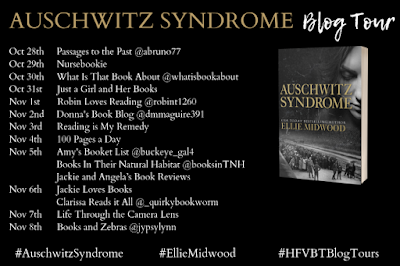 Today I am pleased to be a part of the Blog Tour for Auschwitz Syndrome by Ellie Midwood. This novel is fictionalized, but it is based on a true story based on historical events.

A strange case scheduled for the Denazification Court lands on the desk of an American psychiatrist currently serving in Germany, Dr. Hoffman.

A former Auschwitz guard, Franz Dahler, is set to appear in court, and he has requested to bring the most unexpected witness to testify in his defense - one of his former inmates and current wife, Helena.

As soon as one of the newly emerging Nazi hunters and former Auschwitz inmate, Andrej Novák, recognizes the officer’s name, he demands a full investigation of Dahler’s crimes, claiming that the former SS man was not only abusing Helena in the camp but is also using her as a ploy to escape prosecution.

Silent, subdued, and seemingly dependent on her husband’s every word, Helena appears to be a classic victim of abuse, and possibly more of an aid to the prosecution instead of the defense.

As she begins giving her testimony, Dr. Hoffman finds himself more and more confused at the picture that gradually emerges before his eyes; a perpetrator is claimed to be the savior and the accuser, the criminal.

The better Dr. Hoffman gets to know each participant, the more he begins to question himself; whether he’s facing a most unimaginable love story, or a new and still-nameless psychological disorder affecting the very manner in which Helena sees the events of the past.

Partially based on a true story, this deeply psychological, haunting novel will take you back in time to the heart of Auschwitz and post-war Germany, and will keep you guessing the true motive of each side. 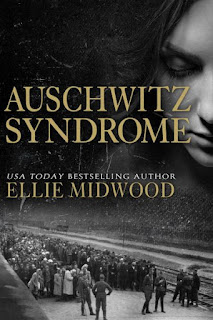 ”He was an SS man and she was an inmate and a Jew.”

Franz Dahler is a former Auschwitz guard and is on trial for his role one of the most horrific times in history. The story is mostly told from his wife Helena's point of view.

In this tragic, unsettling story, we learn how this unlikely pair met, fell in love and eventually married. But, the cover alone, as well as the description above, will tell the reader that this is no easy love story. Not in any way imaginable.

Their story begins with Helena Citronova, a Slovakian Jew, who is 24 hours away from being gassed. The night before, she is picked, along with a few women, to sing in front of an SS guard for his birthday. The man is Franz Dahler, and he simply fell in love. He saved Helena from the gas chamber, and many more times after that. During these horrendous times, through unspeakable experiences, Helena and Franz grew very close.

Their time together was not idyllic by any means, but as it turns out, it was something grown out of shared trials and experiences that created an unbreakable bond. This is just one of the reasons that Franz is on trial. While there was an ongoing crusade to destroy millions of Jews, and countless others, during World War II, afterward there was something else being done entirely. This itself was the Denazification Court. As many war criminals as could be rounded up and tried, these trials went on for several years. Franz Hahler (whose name was changed for this book) was one such man. His case was exacerbated because he married a Jew.

This was something that was fought tooth and nail during the war, and the trial by a former Auschwitz inmate, Andrej Novak. He made many claims against Franz, including stating that Franz and Helena were not in love, but instead that Franz forced himself on Helena and that he would forever be a danger to her.

What an incredible story! We witness many, many things in this book, such as the tragedies the prisoners suffered were rather vivid. Also, the fact that Helena dealt with survivor's guilt. She lived in a camp different from many, and although she suffered greatly, she had many advantages. We also got to see that those loyal to Hitler at that time could indeed be human, as was the case with Franz.

It is impossible not to imagine how we would have dealt with matters if we were there. It makes you really appreciate the life that many of us have now. Most of us deal with first-world problems, did I charge my tablet last night? I feel like ordering out tonight, what do I want?

I really appreciated two things in the Authors Note, actually pretty much the entire note, but two things really stand out. The first thing is a comparison between Stockholm syndrome and love vs. hate. Love won out in this case with Franz and Helena. There is absolutely no doubt about that. Reading this book, as incredibly difficult as it was, proved to be an amazing case of seeing things from a different perspective that in all my of reading historical fiction about World War II and Auschwitz, I never thought I could come remotely close to understanding how such a love could be formed.

It is usually quite easy to read a three or four hundred page book in one sitting, and in just a few hours. Very often, in fact. However, this book was extremely difficult and very hard to assimilate. I had to put it down several times, but I am very glad that I read it in order to gain a different perspective, as well as knowledge.

Lastly I want to commend the author for the respect that she showed towards Jehovah’s Witnesses both in the story and in the end note, because they were victims along with many others in addition to the Jews.

Many thanks to Historical Fiction Book Tours and to Ellie Midwood for this ARC for review. This is my honest opinion.

Monday, October 28
Review at Passages to the Past

Wednesday, October 30
Excerpt at What Is That Book About

Thursday, October 31
Feature at Just a Girl and Her Books

Sunday, November 3
Review at Reading is My Remedy

Thursday, November 7
Review at Life Through the Camera Lens

During the Blog Tour, we are giving away a paperback copy of Auschwitz Syndrome! To enter, please use the Gleam form below. Giveaway Rules – Giveaway ends at 11:59 pm EST on November 8th. You must be 18 or older to enter. – Giveaway is open to US residents only. – Only one entry per household. – All giveaway entrants agree to be honest and not cheat the systems; any suspicion of fraud will be decided upon by blog/site owner and the sponsor, and entrants may be disqualified at our discretion. – The winner has 48 hours to claim prize or a new winner is chosen.

Ellie Midwood is a USA Today bestselling and award-winning historical fiction author. She owes her interest in the history of the Second World War to her grandfather, Junior Sergeant in the 2nd Guards Tank Army of the First Belorussian Front, who began telling her about his experiences on the frontline when she was a young girl. Growing up, her interest in history only deepened and transformed from reading about the war to writing about it. After obtaining her BA in Linguistics, Ellie decided to make writing her full-time career and began working on her first full-length historical novel, "The Girl from Berlin." Ellie is continuously enriching her library with new research material and feeds her passion for WWII and Holocaust history by collecting rare memorabilia and documents. In her free time, Ellie is a health-obsessed yoga enthusiast, neat freak, adventurer, Nazi Germany history expert, polyglot, philosopher, a proud Jew, and a doggie mama. Ellie lives in New York with her fiancé and their Chihuahua named Shark Bait. For more information on Ellie and her novels, please visit her website. You can also find her on Facebook, Amazon, and Goodreads.