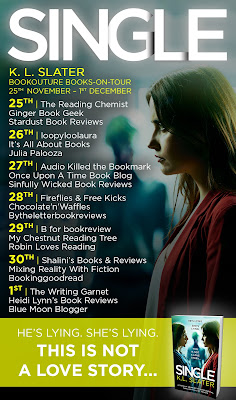 Today is my stop on the Blog Tour for Single by K. L. Slater.

DESCRIPTION:
‘I keep feeling like I’m being watched – dropping the boys off at school, choosing wine at the supermarket – but when I turn around there’s nobody there…’

When single mother Darcy’s son falls from a rope bridge at a local playground, life stands still. She clutches his small, limp body, frozen, until a pair of strong hands push her aside, and she watches as George, a local doctor, saves her son’s life.

George is a single parent too, and with his twinkling hazel eyes, easy charm, and lack of wedding band is almost too good to be true, but coffee becomes lunch, lunch becomes dinner, and soon they can’t go an evening without seeing each other. When he invites her to move into his beautiful home with its sprawling garden for her boys, Darcy doesn’t hesitate.

But as Darcy is settling in, she receives a bunch of flowers with a chilling message. George says they’re from an obsessed ex-girlfriend, Opal, and days later Opal turns up at Darcy’s son’s football match. She claims to have shocking information that could threaten George’s custody of his daughter.

Darcy doesn’t know who to trust, but she’s starting to suspect that, whatever the truth, she might have put her beloved boys into terrible danger …

From the million-copy-bestselling author K.L. Slater this utterly gripping psychological thriller will make you gasp out loud as you race towards the unforgettable twist. If you loved The Girl on the Train and The Wife Between Us this book is for you. 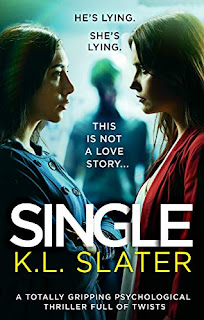 Title:   Single
Author:  K.L.Slater
Genre:   Psychological Thriller
Publisher:  Bookouture
Format:  Kindle ARC
No. of Pages:   383
Date of Publication:  November 25, 2019
My Rating:  5 Stars
Darcy is so very grateful that a stranger came rushing to her aid when her son had an asthma attack. The stranger, who she soon learns is named George, is an esteemed doctor. Meanwhile Darcy's life is not going that great. She eventually begins spending time with George and he ultimately invites her and her son to move in with him and his young daughter.
Beyond her attraction to George, this invitation is a true blessing. For starters, Darcy had a tough past after she lost her husband, even allowing her in-laws to take custody of her son for a while. Although she is now taking full care of her son, the boy spends a lot of time with his grandparents and his aunt.
Meanwhile both Darcy and George are hiding dark pasts and secrets. In both cases, their pasts are front and center, and bringing danger too close and too often. Not only does Darcy have to look over her shoulder. she must now wonder whether or not she can trust George. What is more is that there is something rather sinister going on with her in-laws.
Will all of these things threaten Darcy's future? Will she and her son come away unscathed from people who do not have their best interests at heart? For a thrilling read, as in the case with the other K.L. Slater stories I have had the privilege of reading, do not hesitate to pick up your copy of Single. You will not be disappointed.
Many thanks to Bookouture and to NetGalley for this ARC for review. This is my honest opinion. 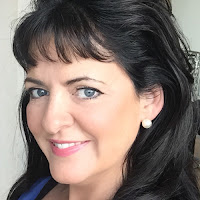