BLOG TOUR - That Summer in Berlin 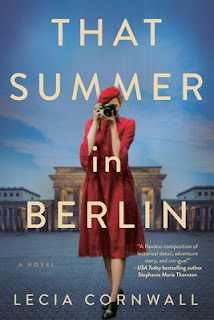 Title:   That Summer in Berlin
Author:  Lecia Cornwall
Publisher:  Berkley Books
Genre:   Historical Fiction
Format:  Kindle ARC
No. of Pages:   464
Date of Publication:   October 11, 2022
My Rating:   5 Stars
DESCRIPTION:
In the summer of 1936, while the Nazis make secret plans for World War II, a courageous and daring young woman struggles to expose the lies behind the dazzling spectacle of the Berlin Olympics.
German power is rising again, threatening a war that will be even worse than the last one. The English aristocracy turns to an age-old institution to stave off war and strengthen political bonds—marriage. Debutantes flock to Germany, including Viviane Alden. On holiday with her sister during the 1936 Berlin Olympics, Viviane’s true purpose is more clandestine. While many in England want to appease Hitler, others seek to prove Germany is rearming. But they need evidence, photographs to tell the tale, and Viviane is a genius with her trusty Leica. And who would suspect a pretty, young tourist taking holiday snaps of being a spy?
Viviane expects to find hatred and injustice, but during the Olympics, with the world watching, Germany is on its best behavior, graciously welcoming tourists to a festival of peace and goodwill. But first impressions can be deceiving, and it’s up to Viviane and the journalist she’s paired with—a daring man with a guarded heart—to reveal the truth.
But others have their own reasons for befriending Viviane, and her adventure takes a darker turn. Suddenly Viviane finds herself caught in a web of far more deadly games—and closer than she ever imagined to the brink of war.
Link to purchase the book
MY THOUGHTS:
It is Berlin 1936, and the Summer Olympics will soon be underway. Meanwhile, war is on the horizon and the Nazis have a lot of plans. Viviane Alden is on holiday with her sister during the planned Summer Olympic games but she actually has a bigger reason for being there. Viviane is gifted with her Leica camera, and the pictures she is taking are actually suiting her purposes of being a spy, a spy no one suspects. Viviane is often paired with a journalist, Tom Graham, and the two take risk after risk.
Viviane and her camera skills were in high demand, which gave her an edge with regard to what her real purpose was, even with all the danger that followed her everywhere. This incredibly intense book had a high level of intrigue while a romance was slowly brewing. However, both Viviane and Tom had to be on their toes at all times, because betrayal was in their midst as well.
No matter how many historical fiction books I read, I always seem to find something different. Lecia Cornwall did that with this book, That Summer in Berlin. It was quite interesting to see how the war efforts and the nefarious activities of the Germans was pushing forward all while pretending things were fine while the ceremonies and games of the Olympics was going on. Quite the contrast, and the author did a fabulous job at presenting both sides, but especially the activities of Viviane and Tom and all of the dangers they faced.
Many thanks to Berkley and to NetGalley for this ARC for review. This is my honest opinion.
Please enjoy my YouTube video review as well -
ABOUT THE AUTHOR:

I was born in the wrong century. I must have been. I’ve always been more comfortable with history than modern life—except for essential modern conveniences like flush toilets, hot running water, immersion blenders, and iPads.
Originally from Ontario, I now call the foothills of Canada’s Rocky Mountains home. I am the author of sixteen novels. The Woman at the Front (October 2021) was my first historical fiction title. It is being followed by That Summer in Berlin, coming this October! I write full time, love gardening (though many plants come to my house just to die), knit (and purl!), adopt stray creatures (usually cats), and create magical worlds from cardboard, paint, and glue. If I’m not at my desk working on my next book, you can find me walking my dog ( Andy, the indefatigable chocolate Lab) by the Bow River, or volunteering at a local museum.
web | twitter