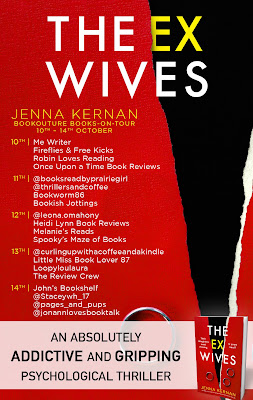 DESCRIPTION:
Two ex-wives. Two missing girls. Will yours be next?Pulling a batch of my husband’s favourite golden oatmeal cookies from the oven, I smile to hear my daughter Phoebe playing in the treehouse outside. I was once so close to losing everything, but since I married handsome Jackson, I have a perfect life. Jackson might tell me what to wear, but he just likes to buy me nice things. He says I don’t need a job, and why would I want one? I can spend all day taking care of Phoebe and running errands in the fancy car Jackson gave me—he knows everywhere I go, and I love how much he wants to keep me safe.But my whole world shatters when I find out Jackson is a liar.He never mentioned he was married before—twice.I love him so much. But how can I trust him now? Desperate for answers, I search our pristine house top to bottom. I thought Jackson was caring: but is it a way to control me?When I track down his ex-wives, I see fear in their eyes. Both these women had little girls just like me. And when they left Jackson, their daughters went missing.Devastated I’ve put Phoebe in danger, I have no choice but to find the truth about those poor girls. To protect Phoebe, I must pretend to still be the perfect wife, even though fear floods through me at Jackson’s touch.But how far will I have to go? And what will happen to me and my sweet child if my husband finds out?An absolutely addictive psychological thriller that will have you racing through the pages late into the night! Fans of The Perfect Marriage, The Wife Between Us and The Woman in the Window won’t be able to put this down.
BUY LINKS:
Amazon: https://geni.us/B0B7C21JLYsocial
Audio Links:
UK: zpr.io/y7kCRYQMP8XW
US: zpr.io/u6rzYAH5GXuj
Listen to a sample here:
https://soundcloud.com/bookouture/the-ex-wives-by-jenna-kernan-narrated-by-stephanie-cannon
You can sign up for all the best Bookouture deals you'll love at: http://ow.ly/Fkiz30lnzdo
MY THOUGHTS: 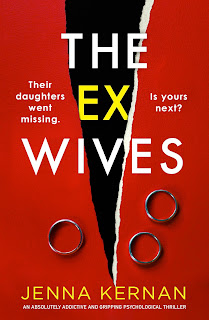 Title:   The Ex-Wives
Author:  Jenna Kernan
Publisher:  Bookouture
Genre:   Psychological Thriller
Format:  Kindle ARC
No. of Pages:   371
Date of Publication:   October 10, 2022
My Rating:   4 Stars
In this tension-filled psychological thriller, Elana is desperate to find a way to get away from her husband Jackson. Although leaving Jackson will be dangerous, causing Elana to remain in a state of constant terror, seven-year-old daughter Phoebe‘s safety is paramount, Elana is doing everything that she can to get them away. Like a commanding officer in the military, Jackson has order after order that he issues to Elana, leaving her very little freedom to find and execute an escape plan.
Although they have only been married for a year, Jackson's true nature showed really quickly. Elana has no doubt that he had everything to do with his first two marriages failing. At first, however, she only knew of his prior marriages. What Elana did not know is that each of his ex-wives had a daughter. And each of their daughters had disappeared without a trace. Now she is more determined than ever to get her and Phoebe away from Jackson before she loses her precious daughter.
At some point, the FBI might seem like the route Elana will choose. But, can she trust them enough, or find enough proof to escape her horrid, controlling and abusive husband? What is it the FBI is looking for to stop Jackson once and for all. If Elana looks for that elusive thing, could it cost her everything? Her life? Phoebe? Jackson is rich, successful, powerful and cruel. Elana's options are few.
Jackson was a really loathsome character. It was so hard to imagine how Elana felt day in and day out, especially when all she wanted to do was to protect her child. I was torn between wanting to throttle Jackson and wanting to grab Elana and Phoebe in a group hug. In this thrilling read by Jenna Kernan, the tension never let up. The twists were a true surprise as this book and this book was yet another one-sitting read for me as I kept hoping for a good resolution for Elana.
Many thanks to Bookouture and to NetGalley for this ARC for review. This is my honest opinion.
Please enjoy my YouTube video review - 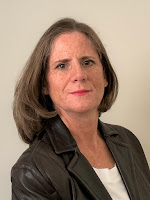 Publishers Weekly bestselling author Jenna Kernan is a two-time RITA nominee and winner of the Book Buyers’ Best award. Prior to signing with Bookouture, she published over thirty novels including her popular APACHE PROTECTOR series, and is a member of numerous writing groups, including International Thriller Writers, Mystery Writers of America, Sisters in Crime, Florida Mystery Writers and Novelists, Inc. and frequently attends conferences on police procedure at the Writers Police Academy and MurderCon. Jenna currently lives on Florida’s Gulf Coast with her husband. A natural redhead, she has recently increased her sunblock to SPF 50.
https://www.jennakernan.com/
https://www.facebook.com/AuthorJennaKernan/
https://www.instagram.com/jenna_kernan/
https://twitter.com/jennakernan
Sign up to be the first to hear about new releases from Jenna Kernan here: https://www.bookouture.com/jenna-kernan