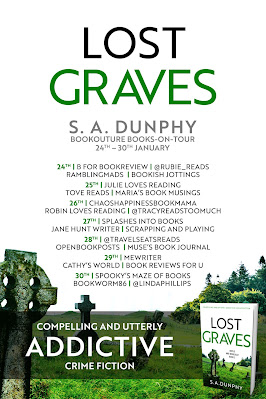 DESCRIPTION:
The only sound in the forest was the wind through the branches; the only light came from the campfire. Jessie stood up, suddenly gripped by a powerful sense of dread. There was something – someone – beyond the darkness, through the trees…When single father Joe Keenan and his young son Finbar make camp for the night in the ancient forest of Leitrim, little do they imagine their rural escape is about to turn into a nightmare. For deep in the woods they find a corpse… As the remains of dozens more victims are uncovered by police, it becomes clear this is the burial site of a serial killer who has obviously been active, unnoticed, for years.Arrested for the murders, while his beloved son is sent into care, Joe pleads his innocence to no avail. But criminal behaviourist Jessie Boyle is convinced the killer is still out there. Determined to reunite Joe and his son, Jessie’s investigation turns towards the local community. Who knows the shadowy depths of the forest well enough to hide not just one, but many bodies?Then someone else goes missing, and the situation takes a terrifying turn: it’s clear the killer is escalating their gruesome spree. Forced to enter the woods alone to save a life, Jessie runs from a killer so skilled at hiding and so clever at hunting, it will take every ounce of her strength to make it out alive…A gripping, nail-biting crime thriller that will have you hooked from the first page to the final line. Fans of Patricia Gibney, Lisa Gardner and Lisa Regan will not want to miss this.
BUY LINKS:
Amazon: https://bit.ly/3KmjQB8
Apple: https://apple.co/30qjIOf
Kobo: https://bit.ly/3vkaCxY
Google: https://bit.ly/3aNIJ86
MY THOUGHTS: 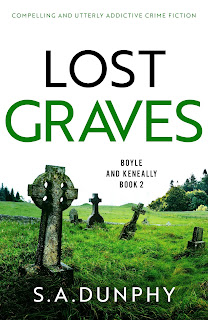 Title:   Lost Graves
Author:  S. A. Dunphy
Series:  Boyle & Keneally #2
Publisher:  Bookouture
Genre:   Mystery & Thrillers
Format:  Kindle and Audiobook ARC
Narrator:  Shelly Atkinson
No. of Pages:   356
Date of Publication:   January 24, 2022
My Rating:   5 Stars
Jessie Boyle is a former criminal behaviorist now working with a small team that includes Seamus Keneally and young Terrie Keho, who is their tech specialist. Their boss, Dawn Wilson, pulled the team together after they solved a previous murder.
There were many compelling factors in this book. One of them includes the Irish travellers. Also there was folklore based on a legend from long ago. While one of the travellers was accused of the murder, Jessie and Seamus did not see it that way. They had to dig deep and as they did they found much more than they bargained for. Also, there was a military edge to this story, one shrowded in secrecy. Would Jessie be able to pull together the murder, the travellers, the legend and the Ireland special forces in order to stop any further murders?
As the story began, an eleven-year-old boy named Fergus Keenan and his dog discovered bones that proved to be human. The police suspected and arrested the boy's father, Joe. Jessie, Seamus and Terrie take on this case at different ends, and one thing becomes clear at the very beginning - Joe is not responsible for the remains that were discovered. In fact, the location is in an area where more than one person had disappeared. Not likely to be a coincidence, and this is just one factor that plays into Joe's innocence.
What of the Irish travellors, and the legendary Abartach they claim is responsible for the bodies discovered? That is not the only legend claimed. In fact, vampires are mentioned. Will Jessie and Seamus be able to seperate fact from fiction in what proves to become a race against time? Also, there are other parties involved. Not only are other travellers of note, but the secrecy of the military is at play.
Not only did this amazing book prove considerable research, Dunphy created compelling characters, drama and tension and incredible intrigue. I loved the first book in this series, Bring Her Home, and this second book, Lost Graves, was even better.
Truth be told, the woods are even scarier to me than they already were after reading this book. That just goes to show how intensely creative this book was written. The eerie vibe never once let up. I love the team and cannot wait to see what is next in stored for Jessie and Seamus.
Many thanks to Bookouture and to NetGalley for this ARC for review. This is my honest opinion.
ABOUT THE AUTHOR:

Shane Dunphy (S. A. Dunphy) was born in Brighton in 1973, but grew up in Ireland, where he has lived and worked for most of his life. A child protection worker for fifteen years, he is the bestselling author of seventeen books, including the number one Irish bestseller Wednesday’s Child and the Sunday Times Bestseller The Girl Who Couldn't Smile. His bestselling series of crime novels (written under the name S. A. Dunphy) feature the criminologist David Dunnigan. Stories From the Margins, his new series of true crime books written for Audible, has been critically acclaimed and the second title in the series, The Bad Place, is an Audible True Crime bestseller.