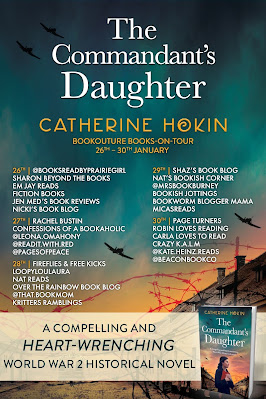 DESCRIPTION:
A heartbreaking novel about the incredible courage of ordinary people during the Second World War. Fans of The Alice Network, The Nightingale and The Tattooist of Auschwitz will never forget this powerful story of hope found in the darkest days.1933, Berlin. Ten-year-old Hanni Foss stands by her father watching the celebrations marking Adolf Hitler as Germany’s new leader. As the torchlights fade, her safe and happy childhood changes forever as Reiner, the father she adores, is corrupted by his new position as commandant of an infamous concentration camp…Twelve years later. As the Nazi regime crumbles, Hanni hides from her father on the outskirts of Berlin. In stolen moments, she develops the photographs she took to record the horrors of the camp – the empty food bowls and desperate faces – and vows to get justice for the innocent people she couldn’t help as a child.But her carefully constructed new life is threatened when Hanni discovers a body hidden in a bombed-out building, and meets Freddy, the tortured young detective in charge of the case. Could the fierce emotion in his brown eyes distract Hanni from her quest for atonement?Or will Reiner stop her himself? Because on the day she plans to deliver her damning photographs to the Allies, Hanni comes face to face with her father again. Reiner Foss has a powerful new identity and he makes it clear just how dangerous it will be to expose him. Now she faces a devastating choice, between the past which haunts her, and the chance of a future with Freddy…
BUY LINK:
Amazon: https://bit.ly/3mcGSz8
MY THOUGHTS: 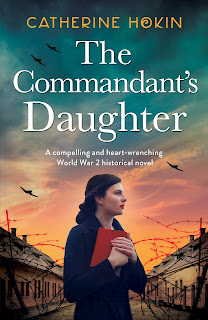 Title:   The Commandant's Daughter
Author:  Catherine Hokin
Series:  Hanni Winter #1
Publisher:  Bookouture
Genre:   Historical Fiction
Format:  Kindle ARC
No. of Pages:   320
Date of Publication:   January 28, 2022
My Rating:   5 Stars
From desperation to devastation, Hanni Winter is determined to expose the horrors of the war. With a father as an SS officer, she saw more than most and Hanni uses her gift as a photographer to help solve the crimes of the SS officers. Meanwhile, Hanni soon finds herself working alongside a Jewish man named Freddy. Although he lost everything in the war he became a police officer. Hanni and Freddy should be sworn enemies, especially considering her father's crimes, but Hanni works to keep her identity a secret.
All the while, Hanni is determined to bring her father to justice, as she found his actions utterly despicable. Hanni is not sure if she is strong enough to tell Freddy who she is, who her father is, and why she is so determined in her efforts. If she does, she worries that he might not be able to forgive her for her role in the devastating war, no matter how small.
Although this historical fiction is a WWII-based story, it takes place a couple of years after the war ended, thus bringing two characters from different worlds together as they worked towards a common goal. In fact, this is the first book in a new series so I am eager to see Hanni going forward as the series continues.
Many thanks to Bookouture and to NetGalley for this ARC for review. This is my honest opinion.
ABOUT THE AUTHOR:

I seem to have followed a rather meandering career, including marketing and teaching and politics (don't try and join the dots), to get where I have always wanted to be, which is writing historical fiction. I am a story lover as well as a story writer and nothing fascinates me more than a strong female protagonist and a quest. Hopefully those are what you will encounter when you pick up my books.

I am from the North of England but now live very happily in Glasgow with my American husband. Both my children have left home (one to London and one to Berlin) which may explain why I am finally writing. If I'm not at my desk you'll most probably find me in the cinema, or just follow the sound of very loud music.

I'd love to hear from you and there are lots of ways you can find me, so jump in via my website https://www.catherinehokin.com/ or on my Cat Hokin FB page or on twitter @cathokin.