BLOG TOUR - The Girl From Paris 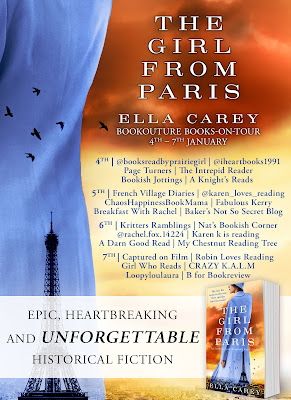 DESCRIPTION:
Vianne rushes through the crowded streets of Paris as the German bombs begin to fall. As she rounds the corner she sees the familiar spires of the old church burst into flames. Too late, she realizes that her mother and sister are trapped inside…

Paris, 1918. The end of war is in sight, and young seamstress Vianne Mercier is longing for the day when she can stop sewing military uniforms and start creating the beautiful dresses that she has been dreaming up in her head.

But just when it seems like peace is within reach, Vianne’s mother and sister are killed in a terrible air raid. To make matters worse, Vianne’s brother has returned home a changed man. Controlling and cruel, he presents Vianne with an ultimatum; give up her dreams of becoming a designer, or be forced onto the streets, penniless and alone.

With nothing left for her in Paris but sad memories, she decides to sail for New York. Determined not to look back, she throws herself into her new life—spending her days sewing dresses for wealthy Upper East Side women, and her evenings dancing the Charleston to Duke Ellington in the new downtown clubs. When Vianne meets handsome Italian Giorgio Conti, he encourages her career, and she feels safe for the first time since she lost her family.

Then news of a terrible accident compels Vianne to suddenly return to France, where she discovers proof of a wartime secret that changes everything she thought she knew about her family. Facing the threat of sickness and ruin, the people who forced Vianne out of her home now suddenly need her help.

Will Vianne find the courage to follow her heart, return to New York and her life with Giorgio? Or will duty bind her to the family she had left behind and force her to remain in France?

From Amazon Charts bestseller Ella Carey comes an utterly gripping and emotional historical wartime novel about the terrible choices people made during humanity’s darkest days. Fans of Fiona Valpy, Rhys Bowen and The Nightingale will adore this novel. 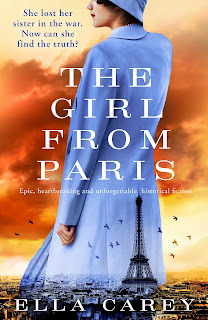 Title:   The Girl From Paris
Author:  Ella Carey
Series:  Daughters of New York #3
Publisher:  Bookouture
Genre:   Historical Fiction
Format:  Kindle ARC
No. of Pages:   388
Date of Publication:   January 4, 2022
My Rating:   5 Stars
World War I just might be coming to an end and Paris streets might be safe yet again. Vianne Mercer is a seamstress. After honing her craft by sewing military uniforms what she really desired was to create beautiful dresses that she could design even just by thinking of them. But, the war was still going on and due to a raid that killed her mother and sister Vianne’s dreams went up in smoke. Not only did her father give up hope, he no longer cared for for the family’s shop. Once her brother came home from the war, Vianne was certain that between the two of them they would be able to keep the business going.
However, he returned home a changed man with a wife on his arm and he turned her out. Her options were very slim. Vianne made the difficult decision to sail to New York. Perhaps she could achieve her dream after all. Vianne’s visions of designing became clearer, and her career started to shine, giving her hope yet again. However, despite the fame she had been achieving, she was forced to return to Paris.
Meanwhile, there was a secret that emanated from the war that had a strong impact on Vianne, her life and her decisions. As she struggled to find her feet again, she could not help but miss a man that she met in New York named Giorgio, but she fairly well had lost hope of ever being happy.
What a stellar book! An excellent addition to a fabulous series, with the first two books being A New York Secret and The Lost Girl of Berlin. While each book could be read as a stand-alone, I am pleased that I have been able to thoroughly enjoy each of these marvelous books. With this one, The Girl From Paris, readers are treated to another strong, compassionate and successful woman at a time when women were expected to simply marry and start a family.
Many thanks to Bookouture and to NetGalley for this ARC for review. This is my honest opinion.
ABOUT THE AUTHOR:

Ella Carey is the USA Today and Amazon charts bestselling author of eight novels of historical fiction, including the Secrets of Paris Series, published with Hachette imprint, Bookouture. Ella’s novels have reached over one million readers and have been translated into fourteen languages. Ella has recently signed a six book deal in Germany and a nine book deal in Denmark. Ella’s latest novels are A New York Secret, and The Lost Girl of Berlin, both published with Bookouture in 2021. The Girl from Paris is the third novel in this new series, and will publish in January, 2022. Ella has a music degree in classical piano, and an arts degree majoring in English and history. Her novels have been shortlisted for ARRA awards. For further information:
Website
Twitter
Facebook
Instagram