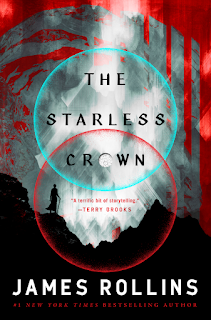 An alliance embarks on a dangerous journey to uncover the secrets of the distant past and save their world in this captivating, deeply visionary adventure from #1 New York Times bestselling thriller-master James Rollins.

A gifted student foretells an apocalypse. Her reward is a sentence of death.

Fleeing into the unknown she is drawn into a team of outcasts:

A broken soldier, who once again takes up the weapons he’s forbidden to wield and carves a trail back home.

A drunken prince, who steps out from his beloved brother's shadow and claims a purpose of his own.

An imprisoned thief, who escapes the crushing dark and discovers a gleaming artifact - one that will ignite a power struggle across the globe.

On the run, hunted by enemies old and new, they must learn to trust each other in order to survive in a world evolved in strange, beautiful, and deadly ways, and uncover ancient secrets that hold the key to their salvation.

But with each passing moment, doom draws closer.

WHO WILL CLAIM THE STARLESS CROWN?
Link to purchase the book.
MY THOUGHTS:
She may be young. Her sight might be restricted, but her vision is clear. An apocolypse is coming and she will do her best to warn as many as possible, even if it means her very life. On the run she is not alone. In fact, there are others who are running, even if for different reasons. One is a prince determined to prove himself. Another is a thief who has escaped the bond of prisons. Then there is a soldier who thought he left war for good. These prove to be a team of misfits who might be the last chance for this world.
Nothing is safe for this unlikely team. They do have some advantages, including magic and alchemy, but will even those special things be enough?
Who are the players in this exciting story by James Rollins. Meet Nyx, fourteen years old with near blindness but visions and dreams that foretell the end of the world. Then we have Rhaif, the thief that is now part of the small group. There is also Prince Kanthre, second born son of a king and Graylin sy Moor, former knight and a man who has been in exhile. Unlikely combination to be sure, but their options are few and life on the run is soon paired with the need for trust and mysteries that need unraveling.
Listening to this book was very intriguing. I chose to listen to it for a few hours each day so that I could absorb myself in this unique world. While the characters most certainly led different lives before, now they must work together towards a common goal, facing danger at every turn. James Rollins did a fabulous job of bringing everything together, page after page, all while setting up excellent world building, thus setting readers up for what promises to be an enthralling series.
Many thanks to Tor Books and to NetGalley for this ARC for review. This is my honest opinion.
ABOUT THE AUTHOR: 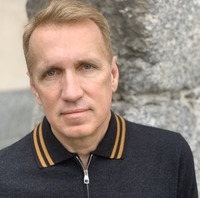 James Rollins is the #1 New York Times bestselling author of international thrillers. His writing has been translated into more than forty languages and has sold more than 20 million books. The New York Times says, “Rollins is what you might wind up with if you tossed Michael Crichton and Dan Brown into a particle accelerator together.” NPR calls his work, “Adventurous and enormously engrossing.” Rollins unveils unseen worlds, scientific breakthroughs, and historical secrets matched with stunning suspense. As a veterinarian, he had a practice in Sacramento for over a decade and still volunteers at local shelters. Nowadays, Rollins shares his home up in the Sierra Nevada Mountains with his two golden retrievers, Echo and Duncan. He also enjoys scuba diving, spelunking, kayaking, and hiking. Of course, he loves to travel and experience new places around the world, which often inspire his next globe-trotting adventure.
As a boy immersed in the scientific adventures of Doc Savage, the wonders of Jules Verne and H.G. Wells, and pulps such as The Shadow, The Spider, and The Avenger, James Rollins decided he wanted to be a writer. He honed his storytelling skills early, spinning elaborate tales that were often at the heart of pranks played on his brothers and sisters.
Before he would set heroes and villains on harrowing adventures, Rollins embarked on a career in veterinary medicine, graduating from the University of Missouri and establishing a successful veterinary practice. He continues to volunteer his time and veterinary skills in support of the local SPCA. His hands-on knowledge of medicine and science helps shape the research and scientific speculation that set James Rollins books apart.
web | twitter