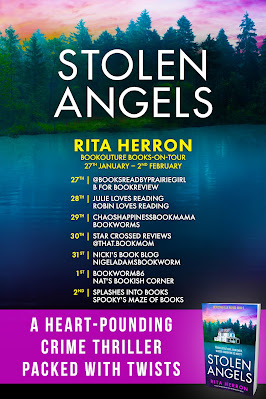 Twisting her hands together, she bites back a sob. She only turned her back for a second, and then her daughter was gone. Every mother in town would be hugging their children tighter tonight.Lara is baking cupcakes when her six-year-old daughter Ava runs to catch the school bus just one block away. Chasing after her, Lara sees the bus tumbling past, and waves. But Ava never turns up at school.Detective Ellie Reeves is in a race against time to find her––in missing child cases, every second counts. Searching the small town of Crooked Creek, she finds the girl’s bunny in the local park, the toy Ava carried around everywhere. Did Ava ever get on the bus?While Ellie works around the clock, a local reporter gets a message: There are other missing girls out there. Digging into previous cases, Ellie discovers that another girl went missing on the same day the previous year. How many more could there be?Ellie is certain that the date means something––and that the person who sent the message is the key. But the community is up in arms, everyone worried that their daughter will be next, and blaming Ellie. The pressure is mounting, and time is running out to bring little Ava home. Can Ellie solve the toughest case of her career––and save Ava––before it’s too late?An utterly addictive and twist-packed thriller guaranteed to get your heart racing! Perfect for fans of Lisa Regan, Melinda Leigh and Kendra Elliot. 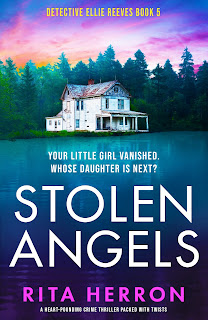 Title:   Stolen Angels
Author:  Rita Herron
Series:  Detective Ellie Reeves #5
Publisher:  Bookouture
Genre:   Mystery & Thrillers
Format:  Kindle ARC
No. of Pages:   448
Date of Publication:   January 27, 2021
My Rating:   4 Stars
Busy and distracted, Lara Truman isn't too worried that her daughter made the school bus. It is only a block away and just this once she doesn't accompany her to the bus stop. Shockingly however, Lara discovers that Ava never made it to school, and thus did not even get on the bus. Detective Ellie Reeves is now working on Ava's case, desperate to find the little girl alive. It is near Christmas and Ellie really hopes to return Ava safely to her mother before the holidays.
As Ellie feverishly searches for little Ava someone else becomes involved. A local reporter is clued in that Ava's disappearance may not be the first in the small town of Crooked Creek. Same situation. So, Ellie realizes the cases must be connected, and even wonders if there are other similar cases of children being taken.
As Ellie starts connecting the dots, she discovers more than one sad facts involving other little girls and their mothers. No doubt these women were broken after their daughters went missing and Ellie is determined to find Ava. Ellie doesn't work alone. In fact, FBI Special Agent Derrick Fox and Ranger Cord McClain are also searching for Ava. This fast-paced story never once let up in intensity as the mystery was being solved.
One thing that kept the tension high in this story was the multiple POVs. Not only did we have Ellie's, but we have the kidnapper's and some of the other mothers and situations. This racheted up the story even more, making this fifth book in the Detective Ellie Reeves series an excellent addition to a thrilling series.
Many thanks to Bookouture and to NetGalley for this ARC for review. This is my honest opinion. 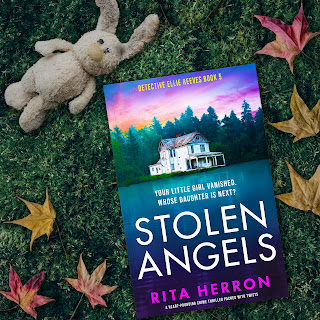 USA Today Bestselling and award-winning author Rita Herron fell in love with books at the ripe age of eight when she read her first Trixie Belden mystery. But she didn't think real people grew up to be writers, so she became a teacher instead. Now she writes so she doesn't have to get a real job.

With over ninety books to her credit, she's penned romantic suspense, romantic comedy, and YA novels, but she especially likes writing dark romantic suspense and crime fiction set in small southern towns.

For more on Rita and her titles, visit her at www.ritaherron.com. You can also find her on Facebook/ritaherron.com and Twitter @ritaherron.