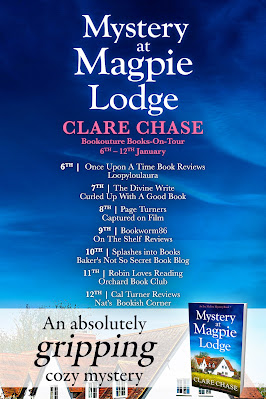 DESCRIPTION:
After the black sheep of the Fulton family is found dead, the village of Saxford St Peter is quick to blame it on his past misdeeds. But Eve Mallow is on the hunt for someone closer to home…When the down-on-his-luck Emory Fulton moves into crumbling Magpie Lodge, and starts running historical tours, the locals are none too pleased. He’s inventing grisly tales about their lovely little village, and disturbing everyone’s peace.But then he’s found dead in his bath, and everyone is suddenly running scared. Could something strange be happening? After all, the murder mirrors one of Fulton’s stories about Saxford’s dark past…But Eve Mallow is sure the answers lie in much more recent events.Accompanied by her stalwart dachshund sidekick Gus, she starts to dig a little deeper. Could it be Fulton’s snobbish bigwig brother, or the suspicious local academic? Why was his goddaughter handing him mysteriousparcels, and why wouldn’t his sister-in-law let him in her house?As Eve unravels the secrets of the living and the dead, one thing is for sure: Fulton was a haunted, hunted man. And if Eve doesn’t crack the case soon, she might find whoever wanted to keep Fulton quiet on her trail too…An unputdownable page-turner, perfect for fans of Faith Martin, Agatha Christie and Betty Rowlands.
BUY LINK: 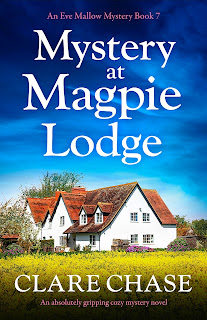 Title:   Mystery at Magpie Lodge
Author:  Clare Chase
Series:  Eve Mallow Mystery #7
Genre:   Cozy Mystery
Publisher:  Bookouture
Format:  Kindle ARC
No. of Pages:   327
Date of Publication:   January 6, 2022
My Rating:   5 Stars
A famed ghosthunter has been murdered. The village is keen on the idea that the supernatural just had to be involved. Eve Mallow has been assigned to write his obituary, as this is her part-time job and is one she takes quite seriously. From the very beginning, Eve stands on the other side of the line. She is sure that the murderer is as human as she is. So, she begins asking probing questions.
When Eve thinks of composing an obituary, she likes to find out as much as she can about the deceased. This makes it rather easy for people to talk to her. To confide in her. But, Eve goes the extra mile. In fact, she has become more than adept at solving quite a few murders. Well, with Emory Fulton's death, Eve intends to do just that.
Eve doesn't work alone, however. Not only does she have her trusty dachshund Gus with her every step of the way, she also has her beau Robin by her side. Robin is the village of Saxford's St. Peter's gardener. But, he is much more than that. In fact, he once was a detective inspector. Due to his previous employment, Robin and Eve have very good reasons for keeping their blossoming relationship secret.
What of Emory Fulton? Why did he show up in the village and now has been murdered? Well, the locals love a good ghost story, and what better time to spin the most interesting tales as Eve talks to everyone she can find? Quite naturally, there are a bevy of suspects. How far will Eve push to get to the truth of what happened, and will she manage to stay stafe in her endeavors?
Oh I loved this book and have been thoroughly enjoying this entire series. I adore Eve. A mother to grown twins, she still has a marvelous joie de vivre. Yes, a rich and charming life with more than one job, a handsome man at her side and the innate skill of solving even the most difficult of cases.
Eve Mallow reminds me of a younger version of Miss Marple or even Jessica Fletcher. Clare Chase has written another winner and I am really looking forward to the eighth book in this delightful series.
Many thanks to Bookouture and to NetGalley for this ARC for review. This is my honest opinion. 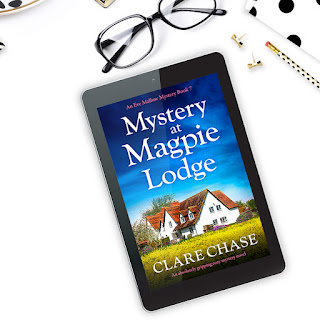 Clare Chase writes classic mysteries. Her aim is to take readers away from it all via some armchair sleuthing in atmospheric locations.Her debut novel was shortlisted for Novelicious's Undiscovered Award, as well as an EPIC award post-publication, and was chosen as a Debut of the Month by LoveReading. Murder on the Marshes (Tara Thorpe 1) was shortlisted for an International Thriller Writers award.Like her heroines, Clare is fascinated by people and what makes them tick. Before becoming a full-time writer, she worked in settings as diverse as Littlehey Prison and the University of Cambridge, in her home city. She's lived everywhere from the house of a lord to a slug-infested flat and finds the mid-terrace she currently occupies a good happy medium.As well as writing, Clare loves family time, art and architecture, cooking, and of course, reading other people's books.You can find Clare's website and blog at www.clarechase.com
Social Media
Facebook: https://www.facebook.com/ClareChaseAuthor
Twitter: https://twitter.com/ClareChase_
Website: www.clarechase.com
Instagram: https://www.instagram.com/clarechaseauthor/