BLOG TOUR - The Siren of Sussex 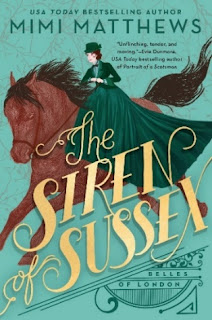 Title:  The Siren of Sussex
Author:  Mimi Matthews
Publisher:  Berkley
Series:  Belles of London #1
Genre:   Historical Romance
Format:  Kindle ARC
No. of Pages:   336
Date of Publication:   January 11, 2022
My Rating:   5 Stars
DESCRIPTION:
USA Today bestselling historical romance writer Mimi Matthews makes her Berkley debut with a boldly feminist tale about a daring equestrienne in her quest for independence just as the birth of haute couture takes the echelons of Victorian society by storm.
Matthews’ novel is inspired by the real-life Pretty Horsebreakers, a scandalous group of equestriennes and infamous courtesans at the forefront of fashion trends in Victorian London who defied the rules of polite society, and Charles Worth, the father of haute couture. THE SIREN OF SUSSEX (Berkley Trade Paperback Original; January 11, 2022) introduces Evelyn Maltravers, an incurable bluestocking determined to make her first and only season in London a roaring success.
Evelyn Maltravers is not exactly the woman who comes to mind when picturing a distinguished lady of the ton. More suited to riding than dancing, and much more opinionated than a young lady ought to be, her chances of securing a successful match have always been slim. But after her eldest sister is embroiled in scandal, that is exactly what she must do. Freshly arrived in London, Evelyn has one season to secure a husband and ensure both her own future and that of her four younger sisters. While Evelyn knows she will never dazzle the ton in a ballroom, there is one place where she has the advantage over all the ladies of polite society—on horseback in Rotten Row. But if she is to rival the alluring beauty of the Pretty Horsebreakers, she will need a tailor unafraid to take risks to make her the most fashionable equestrienne of the ton.
Evelyn turns to half-Indian dressmaker Ahmad Malik, who has a unique talent for bringing out his clients’ best features. Despite the inherent barriers he faces to becoming part of high society, Ahmad is working toward owning his own shop by designing the eye-catching habits of the Pretty Horsebreakers. Evelyn is convinced that Ahmad is the only person who can make her debut at Rotten Row a success. Ahmad knows that Evelyn, a fierce and confident woman on horseback, is the perfect muse, and an alluring subject to display his designs to the ton, if only he can set aside the intense attraction he feels for her.
With both their futures at stake, Ahmad will have to turn the diamond in the rough into the diamond of the season—while they both strive not to lose their hearts in the process.
Mimi Matthews delivers an enthralling romance while exploring themes of race, class, and the lingering effects of British colonialism. Drawing from her own Indian heritage and experience as an avid horse rider, Matthews brings to life Ahmad and Evelyn, two outsiders who change the course of Victorian society.
MY THOUGHTS:
Evelyn Maltravers. Ahman Malik. They each have dreams. She is an accomplished equestrienne about to have her London season at the advanced age of twenty-three. He is a tailor hoping to one day own his own shop. She is British and is deigned to marry well. He is half British and half Indian facing more than one obstacle in life.
Wealth, rank and British colonial rule forbade anything from ever happening between them, but the more time Evelyn spent in Ahmad's shop as he designed and made riding habits for her the more it became clear that they were drawn to one another. Each has their own baggage, however. For Ahmad, although is more than proficient as a tailor, his goal is to become a dressmaker. Evelyn has her own challenges. In fact, her sister had a season previously and dishonored her family name. However, with four younger sisters to have hope in the future Evelyn must marry well.
It is a rare thing indeed for a person of color to be a prominent character in a Victorian historical romance. This, as well as class distinction and the unfortunate prejudices that existed at the time, drew me deeply into this touching story. It was with eager anticipation that I just had to see how Evelyn and Ahmad would overcome what seemed the impossible.
I loved Evelyn and I loved Ahmad. For Evelyn her independent nature and her growing love for Ahmad was just wonderful. Also, it is always a treat when a woman realizes her true beauty. Then for Ahmad, seeing him overcome the most difficult of obstacles while he proved his talent was a joy to read. This is the eighth book that I have read by Mimi Matthews and I thoroughly enjoyed it. As this is the first book in a new series, I look forward to reading of more strong women and the men they find in their pursuits of love.
Many thanks to Berkley and to NetGalley for this ARC for review. This is my honest opinion.
Please enjoy the following excerpt:
ABOUT THE AUTHOR: 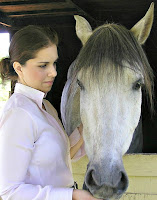 USA Today bestselling author Mimi Matthews writes both historical nonfiction and award-winning proper Victorian romances. Her novels have received starred reviews in Library Journal, Publishers Weekly, Booklist, and Kirkus, and her articles have been featured on the Victorian Web, the Journal of Victorian Culture, and in syndication at BUST Magazine. In her other life, Mimi is an attorney. She resides in California with her family, which includes a retired Andalusian dressage horse, and two Siamese cats. Learn more online at mimimatthews.com.