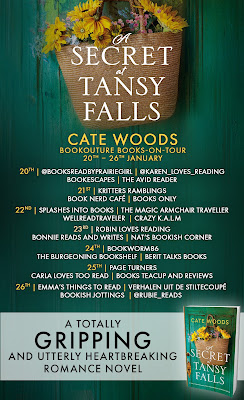 DESCRIPTION:
The old farmhouse at Tansy Falls. A little patch of paradise in the hills of Vermont. Home to happy couple Connie and Nate. And a long-buried secret that will ignite a devastating spark…As the summer sun sets over the sleepy Vermont town of TansyFalls, Connie is reminded of how lucky she is. Every day, when she leaves the job she loves, managing the Covered Bridge Inn with her best friend Piper, she looks forward to returning to the farmhouse she shares with her husband Nate. At home, her flowerbeds overflow with day lilies and the weathered brick walls of her beautiful house glow in the evening light. The air is filled with the scent of the puffed apple pancakes she prepared that morning.But one night, when Nate returns home, he is distant. He and Connie have been married for a long time, and while the laughter and lingering kisses have dwindled, Connie believed they would be together forever. So when a stranger arrives on their doorstep with a shocking secret about Nate, Connie’s life changes beyond all recognition.Connie never thought she’d need to start over and live a life without Nate by her side. But as her heart breaks, Piper and the team at the inn are ready to help stitch it back together, with thoughtful advice washed down with warm spiced cider. As Connie begins to feel whole again, distraction arrives in the form of olive-skinned, broad-shouldered newcomer James. Nate has taught Connie that she doesn’t need a man, but James’s arrival helps her discover that she can follow her own dreams too. But as more secrets come to the surface, Connie wonders if she’ll ever truly be able to leave behind her past for good…If you love gripping, heartbreaking romantic stories by Elin Hildebrand and Robyn Carr, you will be hooked by A Secret at Tansy Falls. A completely compelling read about secrets and betrayal that will have you reaching for the tissues.
BUY LINKS:
Amazon: https://bit.ly/3qpVGgU
Apple: https://apple.co/3pr8vYr
Kobo: https://bit.ly/3pox0W7
Google: https://bit.ly/3vBIYg1
MY THOUGHTS: 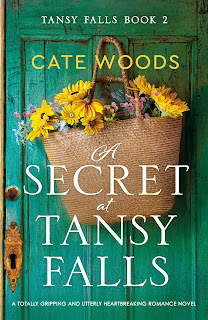 Title:   A Secret at Tansy Falls
Author:  Cate Woods
Series:  Tansy Falls #2
Publisher:  Bookouture
Genre:   Women's Fiction
Format:  Kindle ARC
No. of Pages:   222
Date of Publication:  January 20, 2022
My Rating:   4 Stars
Starting over is never easy and that proves to be the case for Connie. She had been married to Nate for two decades but she finds him less and less engaged. Finances get rather tight, especially after Nate loses his job. They decide to take in a boarder named James. Meanwhile, Connie is working hard at her job managing a small hotel. She faces difficulty with staff and an impending event. Meanwhile, James begins paying her more attention than Nate had been of late. Also, Connie finds herself very worried about her father as he becomes involved with a woman many years his junior.
The drama facing Connie meets no end. Unable to connect with Nate, finding herself drawn to James, Then her concern for her father and her relationship with her sister come into play. Although this is the second book in a trilogy, having not read the first book didn't lessen the enjoyment of this one. The characters and the plot were engaging, as well as the setting. As someone who lives in New England, I loved reading this book set in the hills of Vermont.
Many thanks to Bookouture and to NetGalley for this ARC for review. This is my honest opinion.
ABOUT THE AUTHOR:

Cate Woods made the most of her university degree in Anglo-Saxon Literature by embarking on a career making tea on programmes including The Big Breakfast, Who Wants to be a Millionaire and French & Saunders. After narrowly missing out on the chance to become a Channel 5 weather girl, she moved into the world of magazine journalism, then ghostwriting and now writes novels under her own name. She has written two best-selling romantic comedies – Just Haven't Met You Yet and More Than a Feeling – and a festive novel, The Christmas Guest, under the name Daisy Bell. Cate lives in London with her husband and two children.