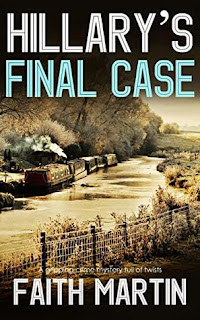 ONE OF THE WORLD’S FAVOURITE DETECTIVES BOWS OUT IN THE FINAL BOOK OF THIS MILLION-SELLING SERIES.

PLEASE NOTE THIS IS A REVISED EDITION OF A BOOK FIRST PUBLISHED AS “A NARROW TRAJECTORY.”

Can Hillary finally close the case of the missing young women?

Can she take down one of Oxfordshire’s most wanted criminals?

Can she handle her new boss?

Can she help one of her team get answers on his long lost sister?

And will she really get married and leave her beloved boat?

FIND OUT THE ANSWERS IN THE FINAL HILLARY GREENE BOOK

Despite the fact that my TBR is toppling over, this book by Faith Martin sat for quite some times. Hillary's last book. Her final case. Call it denial, but if I didn't read it, I didn't have to see the Detective Hillary Greene series ending.

As the blurb states, this is Hillary's final case, while at the same time carving a path to a new future.  Hillary was a celebrated DI for years. She had a solve rate "second to none". Having retired, she is now a civilian cold-case consultant for the Crime Review Team. The unit she works for is rather small, and her boss is Chief Superintendent Stephen Crayle, and her life partner, or could be if she would accept his marriage proposal. She finally has an answer for Stephen. But, for now the team must deal with an ongoing problem.

One of their own, Jake, has been spying on Hillary. After having gathered sufficient evidence against him Faith, with Stephen allowing her to take the lead, questions Jake, who is an IT millionaire apparently eager in his job as a civilian consultant like Hillary. Why, then, is he spying on her, breaking into her computer?

Meanwhile, the team's current case is a missing persons case involving the disappearance of several young women. The team focuses on a slippery criminal named Dale Medcalfe. They are convinced that he is behind things and they try and set a trap to catch him once and for all.

These mysteries by Faith Martin are always interesting, fast-moving and rather tricky. I admire Hillary Greene as the perfect detective, knocking on as many doors as possible, and as this book deals with something very serious when it comes to the women they are trying to track down, this book is one of the best in the series.

Although I didn't get a chance to read the entire series, only having read a few, I loved the no-nonsense way Hillary took at getting to the bottom of things and seeing how she earned her reputation. Since reading the previous book in this series, Murder in Mind, I have had the privilege of reading another series by her and have really come to love her writing. With regard to Hillary, stay tuned.

Many thanks to Joffe Books and to NetGalley for this ARC for review. This is my honest opinion.


As Joyce Cato, she writes more classically-inspired 'proper' whodunits. So, if you like an amateur sleuth, plenty of clues and red herrings, plus a baffling murder mystery to solve, these are the books for you.