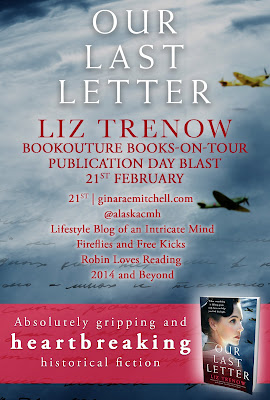 I am glad to have been a part of the Blog Tour or Our Last Letter by Liz Trenow.

From the New York Times bestselling author comes an enthralling historical story inspired by true events – a brilliant, lonely young man and the ordinary English girl who changes his world forever – for readers who loved The Ragged Edge of Night, All the Light We Cannot See and The Nightingale.

I’m getting desperate not hearing from you. Your letters are a lifeline and there is something I need to tell you. Please write, please, please.

1937, England. Kathleen Motts, with her flame-red curls and gift for geometry, grew up just across the water from the secretive RAF base, Bawdsey Manor, on the bleak and beautiful east coast. When the stars overhead turn red as warplanes surge towards her home, Kath is desperate to do her bit, enlisting as one of the first female radar operators, helping to keep the brave pilots safe in troubled skies.

Vikram Mackensie is quiet, exceptional at maths and music, and always the outsider. When he’s recruited for a top-secret war project at Bawdsey Manor, Vic’s chance to belong has arrived at last. He may only be half-British, but he vows to help the country he loves.

From their first meeting on windy cliffs above a rocky beach, Kath arrives like a blaze of warmth into Vic’s grey life and turns the colour back on. As the war intensifies, so do Kath and Vic’s feelings for each other. They may have grown up on different sides of the world – but if the war can’t keep them apart, nothing will.

But fate intervenes when Vic is posted to America, and Kath is left heartbroken and alone. As the silence between them grows, so does the secret that Kath is holding… As the sky falls around Kath, will she ever have more than one last letter?

A heartbreaking and gripping novel, Our Last Letter shows that even in humanity’s darkest moments, light and love will find a way. 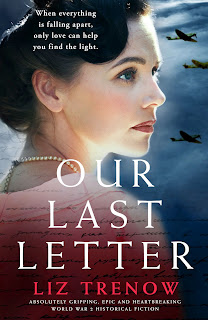 It is 1937 England and unbeknownst to most, the second World War is on the horizon. Kathleen Morris has been happy and one of the things she enjoyed was gazing at the beautiful Bawdsey Manor. She starts to see changes, including gates and walls and strangers embarking in her small village. With an above-average intelligence for math, she eventually seeks to become part of the war effort, hoping to become one of the few women radar operators. Meanwhile, a man approaching the shore and looking for the manor never left Kath's mind.

Meanwhile, Vikram Mackensie has not always had it difficult. Although half British, his brown skin has always set him apart from others. His above-average intelligence as a scientist, however, has given him opportunities he never expected. He is one of the few men being used when it comes to detecting enemy radars. Vic is much like Kath in at least one respect. The two made a connection when he hit the beach, and despite the aggressive war efforts, they begin sending letters to one another.

At some point, Kath is waiting for Vic's next letter and he is doing the same. Kath has no idea where Vic is posted when he was reassigned. Will the two ever meet again and will Kath ever be able to share a precious secret with Vic?

Our Last Letter was an incredibly touching story where hope was never lost. I was riveted to this book, especially as I was able to see another layer to that brutal time in history. The element of love in this story was very effective. The conclusion brought tears of joy to me and with this being the second book that I have read by Liz Trenow I am certain I will be back for more. 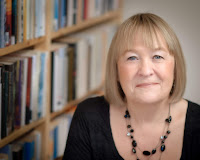 Liz Trenow is a former journalist who spent fifteen years on regional and national newspapers, and on BBC radio and television news, before turning her hand to fiction.

She lives in East Anglia with her artist husband, and they have two grown up daughters and two beautiful grandchildren.