BLOG TOUR - About an Earl 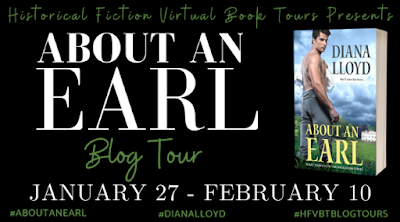 
An outsider at her first English ball, Jewel is fascinated with the beautiful dresses and the lovely dancing, but she’s vowed to save the Earl of Winchcombe from her cousin’s marriage trap. When she first glimpses the handsome lord, her heart beats faster. As they plan to thwart her cousin’s machinations, she discovers a kindred spirit in Oliver—even if he’s a peer and she’s a lowly colonist. Caught kissing the earl, the ball ends in disaster and Jewel’s displeased uncle whisks her away to Scotland..

Lord Scar, as the ton calls Oliver, would rather be anywhere than at a godforsaken masquerade ball and when he learns from the free-spirited colonist about the nefarious marriage plan, he grudgingly accepts her help. Jewel intrigues him and sets his heart racing. Yet, when the ball is over and the mask is off--Oliver curses the scar that will send her screaming away.

When her uncle banishes her, Oliver comes to her rescue by offering Jewel his hand in marriage. She agrees, despite his disfigurement. But what’s a beastly lord like him to do with such a beautiful wife--especially when he discovers she’s delightfully saucy? 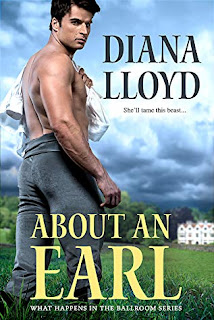 
Jewel is appalled at her cousin's idea to trap the Earl of Winchcombe in marriage. Visiting from America, she hardly fits in the crowd at a ball. The man in question is Oliver, known as Lord Scar among the ton.  Suddenly, they are both working towards their survival. A Bostonian who is hardly fit for an earl. Yet, the pair are pretending a fake engagement.

As Jewel's feeling grow towards Oliver, her heart remains tied up with her father's life and safety. Why is that? Right after the ball, her uncle tried to send her to Scotland, and in the course of things, Jewel learned just enough about things concerning her father. What is more, she learned things that affect her very future. Will she be able to fairly divide her time and her thoughts? Will she go back to Boston on a moment's notice or will she be able to fully open her heart to Oliver?

Meanwhile, Oliver and his twin brother Penry have their own battles. His face bears a scar that causes other problems as time goes on. Conflict abound. However, things do change quickly, especially involving feelings that cannot help but grow. How in the world is he, an Earl, going to make things work with Jewel?

I hadn't read the first book in this series, and I found that About an Earl did fine as a standalone. With a lot of the book was part mystery when it came to Jewel and her past, it did built up a believable and intense romance between her and Oliver. If there are further books in the series, I will be sure to follow them.

Many thanks to Entangled Publishing, NetGalley and to HF Virtual Book Tours for this ARC for review. This is my honest opinion.

Wednesday, January 29
Interview at Passages to the Past

Thursday, February 6
Review at A Chick Who Reads
Excerpt at Books In Their Natural Habitat

Sunday, February 9
Feature at YA, It's Lit

Diana Lloyd, mother of gingers, lives in the state shaped like a mitten. Diana has loved books since she first ate one and appreciated them even more once she learned to read. Enjoying an occasional tumble down the rabbit hole of research, Diana writes historical romance by mixing equal parts History, Heart, and Humor. A 2017 RWA Golden Heart finalist with HOW TO TRAIN YOUR BARON, Diana is anxiously awaiting the publication of book two ABOUT AN EARL and book three LAST LORD STANDING in the "What Happens in the Ballroom" series.

To stay up to date on all of Diana's projects, visit her website.