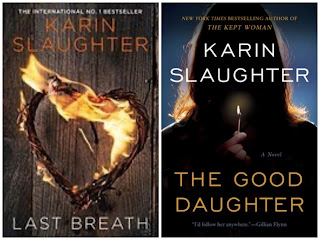 Somewhere along the line The Good Daughter ended up in my Goodreads TBR. When Audible had a 2-for-1 deal, there was no better time to buy it and read it. I realized that there was a prequel, so I got that one from my library and listened to it first. The hours that I spent with these two books was time well spent. 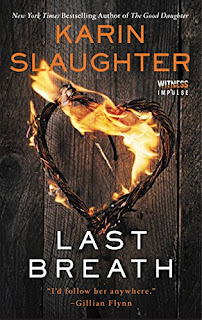 Protecting someone always comes at a cost.

At the age of thirteen, Charlie Quinn’s childhood came to an abrupt and devastating end. Two men, with a grudge against her lawyer father, broke into her home—and after that shocking night, Charlie’s world was never the same.

Now a lawyer herself, Charlie has made it her mission to defend those with no one else to turn to. So when Flora Faulkner, a motherless teen, begs for help, Charlie is reminded of her own past, and is powerless to say no.

But honor-student Flora is in far deeper trouble than Charlie could ever have anticipated. Soon she must ask herself: How far should she go to protect her client? And can she truly believe everything she is being told?

Razor-sharp and lightning-fast, this electrifying story from the #1 international bestselling author will leave you breathless.

Charlie Quinn suffered unspeakable horror and loss when she was thirteen years old. She is now a lawyer and is about to take the case of fifteen-year-old Flora Faulkner. Flora wants to become an emancipated minor and Charlie feels compelled to take her case.

This book is novella length so I listened to it in less than two hours. The book itself was fast-paced as parts of Charlie's past was revealed. Even more so, nothing was as it seemed and Charlie ended up with a fight on her hands. The narration was also very good. The narrator, Kathleen Early, did a fantastic job with the reading and the voices. I immediately read The Good Daughter upon completing this book. 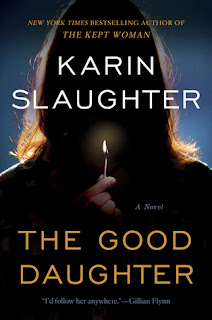 Two girls are forced into the woods at gunpoint. One runs for her life. One is left behind.

Twenty-eight years ago, Charlotte and Samantha Quinn's happy small-town family life was torn apart by a terrifying attack on their family home. It left their mother dead. It left their father—Pikeville's notorious defense attorney—devastated. And it left the family fractured beyond repair, consumed by secrets from that terrible night.

Twenty-eight years later, Charlotte has followed in her father's footsteps to become a lawyer herself—the ideal good daughter. But when violence comes to Pikeville again, and a shocking tragedy leaves the whole town traumatized, Charlotte is plunged into a nightmare. Not only is she the first witness on the scene, but it's a case that unleashes the terrible memories she's spent so long trying to suppress--because the shocking truth about the crime that destroyed her family nearly thirty years ago won't stay buried forever. Packed with twists and turns, brimming with emotion and heart, The Good Daughter is fiction at its most thrilling.

As mentioned in my review of Last Breath, I next read this book, The Good Daughter. I felt that prequel focused more on Charlie Quinn's client. In this book, all of the focus was on Charlie and her sister Sam. This book begin with a disturbing, and (probably for me) unforgettable scene. At the time, they were thirteen and fifteen years of age. Charlie and Sam survived a horrible attack, leaving both with life-changing consequences. These opening chapters are not for the faint of heart.

It is twenty-eight years later and Charlie is a practicing attorney. Charlie finds herself in the middle of another horrific situation that she witnessed. Her father agreed to represent a teen girl who apparently committed a heinous crime. This situation puts her at great odds with husband Ben, also an attorney. When her father is seriously injured due to an attack, Charlie's sister Sam, now estranged for most of their adult lives, steps in to represent their father's client. Not only are there hurt feelings between the sisters, Charlie's husband Ben walks out on her. Now Charlie, Sam, their father Rusty, and even Ben all have a major fight ahead of them.

The Good Daughter is full of twists and turns and consistently brings up events of the past in order for the reader to see how Charlie and Sam have become the women they are now. The scenes were tough to read (again with excellent narration by Kathleen Early) as what happened to the girls when they were teenagers was incredibly awful and beyond tragic.

This book is a riveting and compelling read and I was quite pleased when I noticed on Karin Slaughter's website that it is being developed for video production. Whether it will be a movie for television or for the big screen, this is one I do not want to miss.

Published in 37 languages, with more than 35 million copies sold across the globe, her nineteen novels include the Grant County and Will Trent books, as well as the Edgar-nominated Cop Town and the instant New York Times bestselling novels Pretty Girls and The Good Daughter. Her most recent novel, The Last Widow, features Sara Linton and Will Trent. A native of Georgia, Karin currently lives in Atlanta. Her novels Cop Town, The Good Daughter, and Pieces of Her are all in development for film and television.