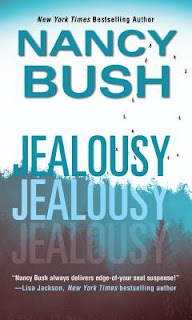 HATRED LEADS TO OBSESSION . . .
It's taken time for the plan to unfold, years spent waiting, watching, hating. . . . And after the first victim, the killing gets easier and easier . . .

OBSESSION LEADS TO JEALOUSY . . .
The Crissmans, owners of Crissman & Wolfe department store, were once one of Portland's most powerful families. There's still enough fortune left to sow mistrust between Lucy, her bohemian sister Layla, their brother Lyle, and his grasping wife Kate. When a charity event at the Crissman Lodge ends in a fatal poisoning, Lucy becomes a prime suspect. But the truth is even more twisted, and Lucy can't be sure which of her family is being targeted . . . or who to fear.

AND JEALOUSY LEADS TO MURDER . . .
Renowned defense attorney Dallas Denton has been hired to clear Lucy's name, unaware of the secret that ties them together or of the deep cracks in the Crissman legacy. Someone is ready to eliminate every obstacle to get what they most covet, and prove that envy runs deeper
than blood . . .

Jealousy is a dramatic story about the Crissman family, an small affluent clan who owns Crissman & Wolfe, a fledgling department store about to undergo serious changes, much to the consternation of the daughters, Layla and Lucy. The son, Lyle, is apparently following the wishes of their father, Abbott. Each of them, Layla, Lucy and Lyle, are have relationships that are explored in this story. Layla is involved with a man that has taken something from her that she desperately wants back. Lucy is in an unhappy marriage, but in no way expects things to turn out as they did. Lyle is married to Kate, who at first is far too clingy, but her style changes.

The book starts of with a prologue that gives us a spoiler. Lucy's husband John is fatally poisoned at the family's charity event. Meanwhile, Abbott is desperately trying to control his children and the family business. His control is bringing on disastrous consequences for all involved. The business, and a related family property seems to be in the cause of fortuitous circumstances.

I expected Jealousy to be a romantic suspense, but it was far more a mystery, or a family drama, than anything else, as there was no romance at all. Instead, it was a multi-layered story that slowly unraveled. The story ran very slow, and it was hard to remain engaged. It was very full of drama, with unexpected surprises and twists and turns. The mysteries themselves were good and did keep me turning pages. However, at times, the story was rather repetitive, which took away from my enjoyment.

Many thanks to Zebra Books  for this ARC to review in exchange for an honest opinion.