BLOG TOUR - A Lover Too Many

Today is my day for the Blog Tour for a Lover to Many by Roy Lewis.

Discover Inspector Crow of Scotland Yard. Enjoy a beautifully told story from a time before smart phones and DNA testing.

“Builds up to a good climax and keeps you reading.” The Observer

Peter Marlin’s wife is found strangled and he becomes the prime suspect. She’d only just returned from an unexplained absence of several months. And during that time, Peter had found a new lover. Everything points to the husband but there’s no real proof.

Inspector John Crow is called in to help the local police. But his new colleagues aren’t keen on an outsider. And Crow must solve the case before anyone else dies.

This fast-paced mystery will have you gripped from start to finish. Set in England in the late 1960s, this is the first book to feature Inspector John Crow. More coming soon.

DISCOVER YOUR NEXT FAVOURITE MYSTERY WRITER

Roy Lewis is one of the most critically acclaimed crime writers of his generation.

“Each Lewis seems to better the last. Here is an intriguing puzzle and likely police work and a fine picture of Northumbrian society and countryside” The Times

“A thorough, unpretentious and immensely solid piece of work with an interesting and likeable hero” Times Literary Supplement

Skeletally-built, mild-mannered Inspector John Crow is established in the Murder Squad in London and constantly meets hostility when he is called upon to work on murder cases in regional crime squads in Wales and the Midlands. He displays strong moral feelings, and a sensitivity which brings him into conflict with regional staff as he doggedly and successfully pursues the truth in cases where he is called in. 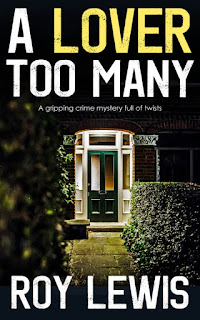 In this reissue of A Lover Too Many by Roy Lewis, Peter Martin's wife has been murdered. While not initially accused of the crime, there are a lot of questions to be asked. Part of the reason is that at one time Peter's wife left him for another. Peter himself has had his own dalliance with a woman named Shirley. Now that his wife has been found dead, these facts raise suspicion towards him. Peter is partner in a law firm, and now his job is at risk.

Inspector John Crow from Scotland Yard is now investigating, with Peter as the main suspect. Intent on proving his innocence, Peter hires a private investigator. However, things go horribly wrong when he is murdered in Peter's home. Will the nightmare that Peter is living ever end? By the way, the story was set in 1960s Scotland, so the approaches to the solving of this crime was handled far differently than it would be today.

While I was very interested in the answers that would eventually be revealed, I found this story very difficult to get into. I struggled with Peter and some of the other characters. Also, I had to gloss over the legalese in this book. I felt it had no relevance to the story at hand. The first part of the book was told strictly from Peter's point of the book. The policing of the story takes up the rest of the book. After about 40% the book did gain traction and I was able to be entertained. While this may not quite be what I was looking for in a book, A Lover Too Many is the first in a new Inspector John Crow series, and that holds much promise.

Many thanks to Joffe Books and to Books n All Promotions for this ARC to review in exchange for my honest opinion.

Roy Lewis is a well-established crime writer with 60 novels to his name. He lives in the north of England where he sets many of his books. He is a former college principal and Inspector of Schools who now runs business training programmes and has business interests in Hong Kong, Singapore and Malaysia. He has three children - all of them lawyers.