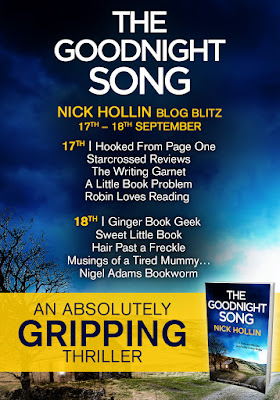 Today is my stop on the Blog Tour for The Goodnight Song by Nick Hollin. Please enjoy the excerpt below.

What would you do if someone used your deepest secrets to commit the darkest crimes?

When the cold, lifeless body of a policeman is pulled from the Thames in the early hours of the morning, it appears at first glance to be a terrible accident.

But when old diary pages predicting the exact details of the crime start appearing online, ex-criminal psychologist and owner of the diary, Nathan Radley, becomes the number one suspect in the most terrifying murder investigation the London police has ever seen.

Nathan’s partner, Detective Katie Rhodes knows that he is innocent, because she was with him the night of the attack. But as more extracts are posted, and more bodies begin to surface, how much longer can she ignore the connection?

The trail leads Katie from one dead end to another, until a tiny clue buried deep within the pages leads them to a new suspect; someone dangerous, someone close, someone they trusted…

A nail-biting and unputdownable thriller that fans of Angela Marsons, Rachel Abbott and Peter James will adore. 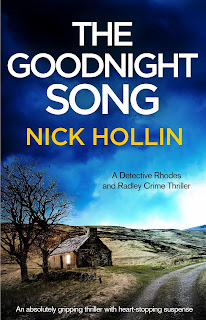 Nathan  follows  his  partner  DI  Katie  Rhodes  under  the  police  tape  and  through  the  front  door  of  the  long-abandoned school.  Ahead of them is  a  damp  corridor,  paint  peeling  from  walls  that  would  once  have  been  covered  in  posters and  artwork,  adding  colour,  life.  It’s an  old  comprehensive,  nothing  like  the  expensive  college  Nathan’s  mother’s multi-million  selling  novels  paid  for  him  to  attend,  but  something  about  the  place  does  seem  familiar.

If your interest has been piqued and you’ve enjoyed what you’ve read, you can grab your copy of Nick Hollin’s THE GOODNIGHT SONG here:

From bookbinder to gardener to forensic analyst, Nick has enjoyed an extremely varied working life. At home his interests are equally diverse, but nothing beats books. Collecting, reading, writing, they have always been a passion in one form or another. A graduate of Royal Holloway's Creative Writing Masters, he's fulfilling a long-held dream of being published and hopes to be at this for a good while yet. He lives in Cambridgeshire with his partner, young son and cat.