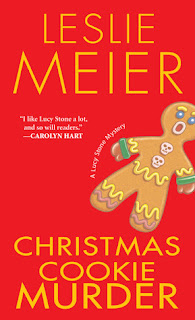 For Lucy Stone, the best thing about Christmas in Tinker’s Cove has always been the annual Cookie Exchange. But the usual generosity and goodwill is missing from this year’s event which turns out to be a complete disaster.

Petty rivalries and feuds that have long been simmering finally come to a boil, leaving a bad taste in the mouths of many guests, including Lee Cummings who accuses Tucker Whitney of stealing her recipe for low-fat, sugar-free cookies. But the icing on the cake is when Tucker is found strangled in her apartment on the following morning.

Who could’ve wanted Tucker dead badly enough to kill her? Despite all of the ingredients for danger, Lucy sets out on the trail of a murderer and soon uncovers a Christmas secret best left wrapped.

Lucy Stone reluctantly agrees to host this year's Christmas cookie exchange. The event proves rather disastrous, but not before she meets a vibrant young lady, Tucker Whitney. Tucker works for Lucy's  best friend Sue at a childcare center. One morning, Lucy learns that Tucker has been killed, most likely murdered. As it was, their is much gossip about the young woman, and suspicion falls to a likely suspect. Despite this, there are other things going on in the small town of Maine that seem to be part of the reason that Tucker was murdered.

Lucy immediately becomes involved, checking things out for herself. Using her gut instincts, and her acquired skill as an amateur detective, she looks beyond the person the police think responsible for Tucker's death. As with Lucy, I was intrigued with finding the murderer. Lucy's focus is torn between checking things out, her job at the town's newspaper, and most importantly, her job as a wife and mother. Her children have grown quite a bit, with her oldest, Toby, being a senior in high school and filling out college applications.

I love these Lucy Stone mysteries, and in this one, Lucy did another fine job sussing out the murderer. It got her into a bit of trouble, as usual, but she doubted the police had the right culprit. However, I was rather dismayed, for not the first time, with a couple of her parenting decisions. I am a mother of six, and am no doubt, not proud of all of the decisions that I made as a parent, but as I am reading this books, I feel that Lucy is a bit too relaxed as a mother. Although his backbone showed a bit, Lucy's husband Bill is almost invisible. I am hoping in future books, of which I am most certainly planning to read, that they tighten their reins just a bit. I look forward to reading Turkey Day Murder next.