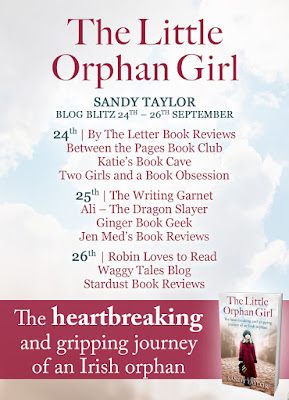 Today is my stop on the Blg Tour for The Little Orphan Girl by Sandy Taylor.

Ireland, 1901: The work house gates clanged shut behind us, as me and the mammy walked down the hill towards the town. I was six years old and leaving the only home I had ever known…

When Cissy Ryan’s real mother comes to claim her from the workhouse, it’s not how she imagined. Her family’s tumbledown cottage has ice on the inside of its windows and is in an isolated, poverty-stricken village in the muddy Irish countryside. But when Cissy is allowed to help neighbour Colm Doyle and his horse named Blue on their milk round one morning, Cissy starts to feel as though friendship could get her through anything.

It’s Colm who looks in on Cissy’s grandfather when she starts at the village school, and Colm who tells her to hold her chin high when she interviews for a position at the grand Bretton House. But in the vast mansion with its shining floors and sweeping staircase, it’s Master Peter Bretton who captures Cissy’s heart with his dark curls and easy laugh.

As Cissy blossoms from a skinny orphan into a confident young girl, Colm tells her she’s as good as anyone and she begins to believe anything is possible. But not everyone with a kind smile has a kind heart, and Cissy doesn’t know that further sorrow lies in store for her.

When Cissy finds herself desperate, alone, and faced with a devastating choice, can she find the strength to survive? 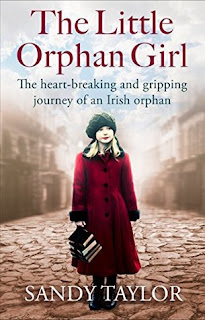 This is an emotional read of a little girl who had been orphaned and how she grew up. The story takes place in the early 1900s in Ireland where young Cissy, formerly named Martha, began her life in a workhouse. At the age of six she left the Union Workhouse with the new mammy. What a life she led until that point. It was all she knew and she thought she was very happy. Everything was now new to her and she was forced to leave her very best friend behind. Cissy goes to live with the mammy, Moira Ryan, and Mrs. Ryan's father. She is told to call Mrs. Ryan Mammy and her new life has begun.

Cissy is able to attend school, and even church, but times then were very hard. Growing up, she developed a strong friendship with a boy a few years older than her, Colm Doyle. They become great friends, and perhaps one day would develop a great love, but many difficult years are ahead before this could ever even be imagined. Eventually she gets a job working for a very rich family.

I was very much drawn into this story. This was a very touching read. The times were hard for the poorer class during those years, and Cissy's story epitomized an incredible amount of sadness. The story takes gentle turns as hope begins to enter into the picture, although there is a long period of poignant moments. This story by Sandy Taylor is an evocative read, bringing readers to a time when lives were just so very difficult. The story was utterly warm as it evolved. What an impressive read! It took a long time for me to deal with the emotional upheaval that I experienced while reading this historical fiction story.

What pleased me is that this is also characterized as a romance, so I read the story with a fervent hope that the tides would shift for Cissy. This book is broken up into several sections during a period of years while we see Cissy grow up and find a life that will suit her. I was not certain for quite a while into the story as to whether or not I would be able to handle the scenarios of the life that Cissy led and her many trials. I am pleased that I stuck with this book. The writing style was a bit unique to me, as it is written in turn of the century Irish twang. It took a bit to get used to, as it was a bit stilted at times, thus slowing down my reading. The author is new to me. It is nice to be drawn into a sad story that evolves into one of hope. I do plan on reading more by Sandy Taylor. 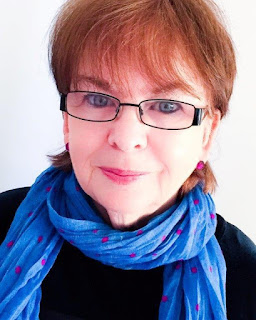 Sandy Taylor grew up on a council estate near Brighton.

There were no books in the house, so Sandy's love of the written word was nurtured in the little local library.

Leaving school at fifteen, Sandy worked in a series of factories before landing a job at Butlins in Minehead.

This career change led her to becoming a singer, a stand-up comic and eventually a playwright and novelist.