HIS DISINCLINED BRIDE by Jennie Goutet is out now! Be sure to order your copy of this sweet Regency romance today!

About His Disinclined Bride:

Theirs is not a love match. She’ll make sure of it.
Kitty Stokes never imagined she’d be so weak as to sacrifice herself on the altar of family obligations, but when the only alternative to marriage with Lord Hayworth is to play nursemaid to her brother’s children, Kitty reluctantly agrees. On her wedding day, she’s certain she has made a grave error, but it’s too late to back out.
Phineas Hayworth refrained from setting eyes on his new bride before their wedding day—the price he forced himself to pay for being so mercenary as to wed the sister of a wealthy merchant in a bid to save his estate from ruins. Her beauty, therefore, comes as a shock, as does her icy treatment, which he feels he deserves. He swears an oath he will not approach her for an heir unless the invitation comes from her.
As Phineas sets out to put his estate in order and present his new wife to Society, he finds her more enchanting than he could have hoped for, even in a love match. Kitty continues to hold him at arm’s length, although he suspects her feelings for him run just as deep. As Phineas’s love and desire for his wife grows, the oath he swore her begins to suffocate. It soon becomes clear that while he’d once been prepared to settle for a loveless marriage, he will not abide an unrequited love.
His Disinclined Bride is a sweet/clean regency romance stand-alone novel, book seven in the Seasons of Change series. ♥ 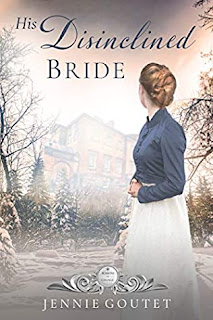 Title:   The Disinclined Bride
Author:  Jennie Goutet
Series:  Seasons of Change #7
Genre:   Historical Romance
Format:  Kindle ARC
No. of Pages:   270
Date of Publication:   October 28, 2020
My Rating:    4 Stars
When Kitty Stokes is told by her brother that he has arranged a marriage for her, she feels impelled to agree for the reasons he suggests. While she knows this will not be a love match, she has always longed or a family of her own and this might be her only opportunity to make that wish come true. While she will miss the time spent with her brother's children, and also her much younger brother, she is determined to make things work.
Phineas Hayworth is tired of being under his father's control and longs to make his life his own. Settling for a woman he's never met, he seeks to prove to his father that he can make his own home, especially when the bride price will be enough for him to start on his own. The first time he sets eyes on Kitty is just before their vows and the first thing Phineas notices is the stunning beauty that she is. It does not take him long to realize that she is just as kind as she is beautiful.
Kitty is more than nervous about her first night with her surprisingly handsome new husband. She is fully aware that he married her for anything but love, but soon finds that he intends to give her opportunity to get to know him. Meanwhile, Kitty cannot forget about her younger brother and worry for him only adds to her concerns.
In this slow burn romance, completely sweet by historical romance standards, Kitty and Phineas learn much about each other. It was interesting to see who would bend first when it came time to address their growing attraction for one another. I loved how this book developed, especially considering the conflicts facing them. I love how Phineas and Kitty worked through their differences, all while love was slowly developing for them. This is my first book by Jennie Goutet and I definitely look forward to reading more from her again. 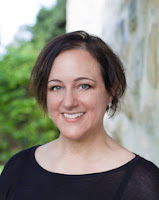 Jennie Goutet is an American-born Anglophile, who lives with her French husband and their three children in a small town outside Paris. Her imagination resides in Regency England, where her historical romances are set. Jennie is also author of the award-winning memoir, Stars Upside Down, and the modern romances, A Sweetheart in Paris and A Noble Affair. A Christian, a cook, and an inveterate klutz, Jennie writes about faith, food, and life—even the clumsy moments—on her blog, aladyinfrance.com. You can learn more about Jennie and her books on her author website, jenniegoutet.com.